A Call To Conservatives – Prepare yourself to vote 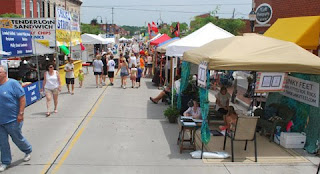 Lee’s Summit, June 6, 2010 – This past weekend our wonderful city put on a great get together; called Lee’s Summit’s Downtown Days.  The weather was great, the crowds were wonderful and business was booming.

As I walked down 3rd Street across the railroad tracks I found myself face to face with a wonderful republican booth worker.  I looked over the table, saw Jacob Turk’s reasons why our esteemed representative Emanuel Cleaver (of whose voting record I’ve written much about) should be sent home.  Well done Jacob Turk!  I noticed that all three republican candidates for Senator from our District were well represented on the table and then I saw Roy Blunt’s pamphlets.  Those of you who read my Blog know that I have my reservations about his voting record (archive).

I told the woman behind the counter that I did not care for Mr. Blunt’s voting record.  I did not like his vote on the TARP and the TARP Recipients Bonuses Tax.  I thought then, as I think now, that those two votes show too little of his claimed “conservative” nature.  But that’s a point for debate.  Her answer is the reason for this particular entry, “Well if you don’t vote for him we’ll have two liberal Senators in Washington.”  I was stunned by her answer.  Was that truly the republican answer?  Was she really saying that it doesn’t matter what his voting record is, just as long as he is from the Republican Party?  Had she not heard of Arlen Specter (the so-called moderate republican who moderated himself all the way to the Democrat side of the aisle)?

So here’s my question to all the Conservatives out there; How would you have answered my question?  I’ll tell you in a moment what I would have done, but let me cover two more things first.  First the woman, nice as can be, tells my wife “you need to work on him.” That lead to the discussion with my wife that is the answer to how I would have answered my comment.

Why Roy Blunt?  Well, he did vote no on health care, and the TARP votes were (or possibly were) simply following what the Republican President of the United States at the time wanted.  Yes, sometimes for the good of the party and without strong evidence or experience to guide you one chooses to vote for what the “experts” are saying.  A vote I assure you Mr. Blunt would take back in light of what is known today.

My mind is not made up about Roy Blunt, but I say this – it is made up regarding the need for Conservatives to stand up and know their candidates and support them from knowledge and not their talking points.

We had an election in 2008 based on talking points and “hope you can believe in” and other nice slogans.  The fact of the matter is that if we don’t start taking this seriously and learn about our candidates, we’re going to be surprised (in an ugly way) come November.  Simply remember the Republican Congress that was ousted by the voters recently, they had lost their conservative compass and were spending money like they had it.  Washington is broke, and ignorance won’t fix it; nor will voting for the guy that’s not a Democrat.

Conservatives, learn the candidates, speak up, write to the newspapers, write to the congressman, write to the senators, both federal and state and ask them “What do you stand for?”  and “What, specifically, will you do in the first 180 and 360 days in office?”

Jocob Turk, I’d love to find out what you’d do.

Roy Blunt, I’d love to find out what you’d do.

Will Krauss, Bryan Pratt, Gary Dusenberg, the same goes for the three of you running for Missouri’s State Senate District 8.

Garry Cross, Bob Gough, Pam Osgood, the State Representative Candidates for District 48 here in Missouri, the same question goes to all of you.

How will you protect our hard earned money, how will you focus on the economy and bring jobs to this area and help this economy get a solid conservative and pro-growth footing?

This is a critical election both in the local, state and federal elections. Fiscal Conservative values are needed more today than at any other time since the days of Jimmy Carter.  We must ask the toughest questions of our candidates and focus on the economy, the economy, and nothing but the economy.  That does not means spend, spend, spend!  It means cut costs, cut red tape, cut taxes, and cut the impediments to entrepreneurship so that the true engine of our economy can get started and grow: small businesses!

We all, myself included, need to focus on the election, learn the most we can about the candidates and speak out between now and the election and on election day; bring out 10 of your friends to vote.