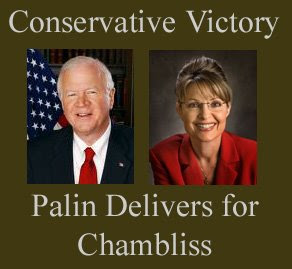 The run-off election was far more important to the conservative movement than the 41st GOP Senator. This was the first chance that the conservative movement had to fight for a seat in congress and let the voters decide. The proven Obama machine moved into Georgia and tried their best to take that seat for the Democrat Party: Kudos to the Party for the effort. Obama, again very well done, stayed away from Georgia since it was one of the states that McCain won back on November 4th. The big names of the party showed up to help Jim Martin. People like Bill Clinton and Al Gore among others of import showed up, and President Elect Barack Obama contributed to the effort with campaign ads.

In November, Senator Saxby Chambliss obtained 49.8% of the vote, James Martin 46.8% with Buckley getting 3.4%. Only 109,671 votes separated Chambliss from Martin (see Georgia Election Results November 4, 2008). This was a very close race and Chambliss had to do something different if he was going to buck the Democrat momentum, the continued losses on Wall Street, the continued credit crisis and the ever present Automotive Industry bailout talk.

Chambliss shed the “moderate” moniker carried throughout the Presidential election by Senator John McCain. He called on Mitt Romney to campaign for him to kick off the main effort. He then followed it up with Rudy Giuliani and Mike Huckabee, and then closed it with Sarah Palin’s whirlwind stops all over the State of Georgia on Monday to bring out crowds as high as 3,000 to 4,000 Georgians. In central Georgia Palin told a crowd of 2,500 “Loosing an election doesn’t mean we have lost our way. . . If we are to lead again, we have a lot of hard work ahead of us.”

The CONSERVATIVES (Romney, Huckabee and Palin) delivered for Chambliss. There was no waffling on issues. There was no equivocating on what the Conservative movement stands for and what voters can expect. There was confidence.

In the end, Chambliss won the run off election by a margin of 59% to 41% with 84% of the precincts reporting. Congratulations to Senator Chambliss.

The bigger reason for celebration is that Governor Sarah Palin delivered in a big way for Chambliss and is continuing to move towards the leadership of the GOP. She brings revival hopes for the Party by delivering the votes, and guiding the party back to the roots. Conservatism’s roots run deep in the United States and Palin will not forget the lessons taught by the Obama campaign. Sarah Palin will lead the GOP back, and her next big test (as it is for the Conservatives) comes in about 23 months.

Governor Sarah Palin is certainly the leader the Conservatives need.