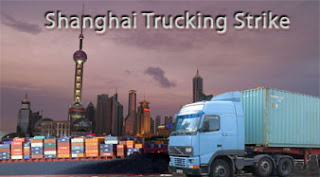 Lee’s Summit, April 23, 2011 – Chinese Autocracy is not all that simple it seems.  In Shanghai, now the most active port in the world, truckers are on strike.  Yes, that’s right even China is seeing some growing pains.

My company is one of only two manufacturers of our products left in the United States; yet we both import some of our products from China.  The decision is made base on what the American professional consumer is willing to pay for a product.  Our highest performance products are made here in Kansas City, while our medium power units come from China.

The interesting thing is that Shanghai’s truck driver strike is only affecting some of the port; yet the Chinese Government and the Shanghai Government are both rightfully worried.  At the root of the strike are two issues: 1) Fuel Prices, and 2) Fees charged to the truckers by the freight companies.

In a Reuter’s article from April 22, 2011 (see here) it claims that “A crowd of up to 600 people milled about outside an office of a logistics company near the Baoshan Port, one of Shanghai’s ports. Some threw rocks at trucks whose drivers had not joined in the strikes, breaking the windows of at least one truck…”

For those of us in the United States, 600 people gathering is not a major deal; but for China – a country who does not allow demonstrations – this is a big deal: “…The strikes and protests, if they continue, could become a worry for the ruling Chinese Communist Party, which fears public discontent that could erode its authority and alarm investors…” That’s the crux of the whole thing.

I work with companies in China on a daily basis.  For the most part the business community is full of entrepreneurs who seek to build wealth, make product, and provide jobs – roughly in that order.  Yet, these company owners have a lot to experience yet before they catch up to the west.

Owners, like everywhere, look to the bottom line.  One driver said, “…his transport company was passing on more and more costs to drivers, including for fuel, because it was making losses…”.  In the United States the Freight companies pass on the dreaded “fuel surcharge” as part of their rates.  We all hate it, but the reality is that fuel is a variable cost that the fleets have little control over.  Granted, the fuel surcharge can be outrageously high and bears little resemblance to the actual cost of moving a truck from point A to point B.

In China’s young market economy company owners still only see “price” as their only competitive weapon.  The grew up competing with Western nations and their costs after more than a hundred years of the industrial revolution.  Now these companies face the most difficult of all challenges: competing with each other.

The first thing they are doing – as most have done – is to try to shift the cost burden to the labor side of the equation.  This works for a while but eventually you get the pushback that is natural “Mr. Owner, you get all the profits, and I have all the cost burden – stop it!”

Seeing China go through this tells me that there have to be multiple factors in place.  If fact there are:

The value of the Chinese Currency (RMB) is strengthening against the dollar.  This means that even if a Chinese company can hold their cost stable, it costs more to buy from the US and from Europe – the two biggest importers of Chinese Goods.

If you do not manage the situation carefully, the more prosperous a country is, the higher the demand for goods.  If you couple that with people making more money, then you have a higher demand with people willing and able to pay more for things.  If the demand outstrips the supply prices are pushed up – if people have the money to pay: and in China a larger and larger segment of the population has the means.

The official inflation rate for March 2011 in China hit 5.4% “…prompting officials to renew vows to use all available means to contain price rises…”

The days of goods traveling down the river to the port are over in China.  The old days of Junks doing the heavy lifting has given way to the trucks on the new Chinese infrastructure.  Fuel costs, controlled by the Central Government, have to yield to market forces at some time.

Fuel costs for trucks that transport containers to the ports is climbing and someone has to pay that cost.  If the buyer in Europe or in the US buys products delivered to the port (which most of us do) then the costs are incurred by the manufacturer.  The trucking company loses business when other freight companies find a way to not pass the cost to the manufactures.  This forces the first company to match the second and thus the cost is passed not to the manufacturer, not to the buyer but to the trucker: Bad Plan!

Rules Need To Be Enforced:

If there’s one thing I learned in my 8 years traveling to China and being driven around is that Chinese love to see how far they can push a rule.  If you’ve not seen it, I truly cannot explain it to you in less than a book.  Let me try to put it this way, traffic laws are only [suggestions] to most drivers, and the horn is the necessary survival tool.

However, all good things must come to an end.  Rules are there to promote efficiency in transportation (at least in someone’s mind).  So, the Shanghai police are starting to crack down on unsafe driving; and truckers are not exempt, nor are they happy as this man points out, “…his main problem besides rising fuel prices was that police had started fining drivers for all sorts of infraction without warning — for not meeting environmental standards, for instance…”

So, in total you have rising fuel costs, inflation in general, pressure from buyers to hold costs, national competition, and the application of rules that were ignored for the most part till now.  It is creating the perfect storm; and the Chinese Government understands the meaning of a 600 person demonstration.  To the US it may be nothing; but to China it is a signal that things can quickly get out of control, especially if you put it in context with what is happening in Egypt, Syria, Libya and the rest of the region.

Things could get very interesting for all of us who import from China, and for our consumers who are used to the low cost of Chinese goods.