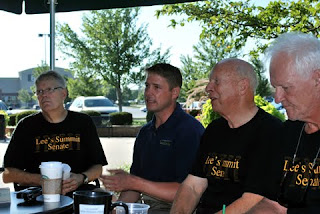 Lee’s Summit, July 23, 2010 – This morning at the Starbucks on Chipman road, at their thrice weekly meeting of the Lee’s Summit Senate, the members sat down to talk about the District 8 Senate race with Representative Will Kraus.  He is involved in the three way race for the Republican nomination for the State Senate.

Who are the members of the Lee’s Summit Senate, you ask?  The group consists of, Wally Chatman, Rich Olsen, Larry Reynolds, Dan Reinheart, Lanny Lea, Tim Hite, Dawn Carl, Doug Stahl, Bill Moehle, Rich Overrider, and Brennen Dotson (training cadet, as the young man referred to himself).  This group meets at Starbucks and the topics range the entire spectrum as you would imagine.  They named themselves, one told me “where else do old men gather, discuss everything and do nothing?  The senate, of course.” As he pointed to the back of his shirt “Lots of Talk, No Action”.

Today’s topic was focused on what Will Kraus stood for and his positions on the issues.  The topic of immigration came up and Representative Kraus explained the Missouri law, which until the Arizona law currently involved in a court battle, was passed earlier this year.

Health Care reform was also brought up during the discussion and Kraus explained that Proposition C was the ballot initiative to block the mandatory nature of the current federal bill.  “It’s important to note, that a vote of Yes, on August 3rd gives Missouri residence the opportunity to make the choice, rather than be mandated by federal law.” Will Kraus said, speaking to the group.  He went on to mention that people need to vote Yes on Prop C if they want to block the mandate from the federal law.

Missouri, like many states, is in the process of enacting laws to send a message to Washington that in this State we don’t appreciate being told what to buy, where to buy it, and how much to buy.

Representative Kraus was asked by a member of the group, “Why is the support of a local group like ours important to you?” to which Kraus responded that conversations, input from and the support of Lee’s Summit citizen groups is his way of making sure his message is getting through, and it gives his current constituents, as well as the constituents in the Senatorial District a chance to understand the person running for office.

The group of Lee’s Summit residents, called the Lee’s Summit Senate voted to support Will Kraus for State Senate, District 8.

Make sure you read up on all the people running, this is a very important race.