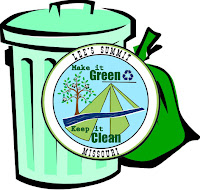 Lee’s Summit, November 27, 2010 – The City of Lee’s Summit is exploring a program for Solid Waste / Curbside Recycling Program that would limit citizen’s choices and award a contract for the entire city. As required by law, on March 4th 2010 the City Council issued – through the city staff – the state-required two year notice to all solid waste haulers providing services in the City that the city was considering implementation of a comprehensive, citywide, solid waste program.
You can find the details at the Lee’s Summit Environment Page and get a clear understanding of the city’s plan.
The Pro-Side of the issue:
The Con-Side of the issue:
Let me use an analogy that I think we can all relate to. How many of us have a choice in Cable Supplier? Some have Time Warner, others have Comcast; but do we have both options? We do have an option, but the Cable companies have such a strong lobby that they prevent Dish Network and Direct TV from offering local channels, so those who want the choice have to use an antenna to get local channels.
Competition is the key to keeping low prices, and to keeping honesty in the business cycle. Lets assume for a moment that some service provider truly gets greedy and sets a very high price for their service, where they have exorbitant margins. What does the marketplace do to control that? Well, competition comes in, undercuts the greedy supplier and you reduce cost.
The free enterprise system works. It is self-correcting as long as you don’t allow monopolies from being established. Here the City of Lee’s Summit is moving to set up a waste-hauling monopoly in the name of “cost savings” for the citizens. That will be true for the first contract. But, can you be assured that once the investment is made, that any waste hauler won’t fight tooth and nail to keep their contract in place?
The intrusion of Government in the private lives of its citizens is wrong. It is wrong when the federal government does it. It is wrong when the State Government does it. It is still wrong with County and City Government do it.
Questions for our Council Members:
City Council has to focus on the creation of jobs, the reduction of taxes and fees to promote the economic growth of Lee’s Summit. This proposal is inappropriately intrusive into the freedoms of the individual home owner and citizen of Lee’s Summit.
Whether you agree with my opinion or not, let your councilman know, you can contact them by going to the City Council page of the Lee’s Summit Web page.
Respectfully Submitted,
The Lee’s Summit Conservative
Please follow and like us: