EASY VOTING – but for who? 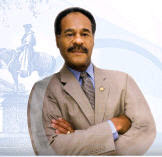 The following comes from Emanuel Cleaver’s EC from DC newsletter of February 10, 2012

Students should be able to exercise their civic duty to vote and make their voices heard. And they should be able to do it easily and without being misled, confused or barred from voting. That is why, this week, I introduced the EASY Voting Act, or Equal Access to Support Youth Voting Act. HR 3978 allows students to vote in a federal election using their current student photo identification. It would also make it a federal crime for any individual to purposely discourage a student from voting by providing false or misleading information.

In the last year, dozens of new voting restrictions have been proposed by states throughout the country, making it harder for Americans to register to vote and to cast a ballot. Thirty four states have proposed legislation that would require voters to present photo ID in order to vote, and seven states have enacted photo ID laws. Yet, statistics show 11% of Americans don’t have a government issued photo ID. And that number jumps to 18% for Americans between the ages of 18-24.

EASY would allow students to use their student photo ID – it’s that, well, easy. It is essential our political process is beyond reproach and this would, in no way, jeopardize that important priority. We must also work, though, to protect the right to vote for all eligible citizens. Instead of protecting our electoral system, some photo identification laws do far more harm than good by disproportionately preventing one of our most vulnerable communities from voting – students.

At first look, this seems like a great idea; but the key question is: Will schools be required to obtain proof of citizenship?  If not, Reverend Cleaver’s “Easy Voting” will become a quick avenue for non-citizens to vote in elections.

What makes me think this will be the case?  Well, simple – I used to be a student with a GREEN CARD that allowed me to be in the country, it allowed me to work and to attend school legally, but it did not grant me the right to vote.  I did not earn my right to vote till I took the Oath of Citizenship.

Cleaver is taking an issue that is important to this nation – the right to vote – and truly making things worse.  If ID’s are required to vote; and every time I go to the ballot box I have to show my Driver’s license, and when I received my Voter ID card in Lee’s Summit I had to show my US Passport to prove I had the right to vote.

I take the privilege of voting very seriously; but I have an issue with ill conceived, half-baked ideas to improve the system.  I want to read HR 3978 (still not available as of this writing) to see how well or how poorly defined the statute proposal regarding what is and is not discouragement of a student to exercise his or her voting right.  In fact, this blog alone, depending on how the law is written,  could be considered “discouraging a student from voting by proving false or misleading information”.

The law, if enacted as is quoted in Representative Cleaver’s e-mail, can put the burden of proof on the accused; which would violate the U.S. criminal theory of “innocent till proven guilty”.  This kind of attack on the civil liberties of the many to protect the few – who actually have recourse by obtaining a government ID – would violate long standing practices in the Unites States penal code.

Let Representative Cleaver know how you feel about the EASY VOTING bill he has introduced.