Einstein said, “Continue to do the same and expect a different result; that’s the definition of insanity.” 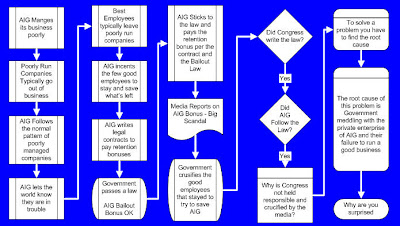 In this blog I’ve cited why I thought at the time that the bail out idea for the Automotive industry was a bad Idea. I also spent countless hours focused on the original bailout plan pointing out to Congressman Emanuel Cleaver, and Senators Clair McCaskill and Kit Bond that the bailout was a bad idea, and would put us on the path to self destruction. I also spent countless hours explaining with logical precision that the government has no business running private enterprise. That’s not the roll of government. The truth is that the vast majority of congress has no clue how to run a small business much less a large enterprise like AIG, or GM, or you name it.

So, the AIG debacle, a logical review:

AIG was a poorly run company. There is a saying by which we run our small business “squeeze the nickel till the buffalo defecates (please substitute the vulgar term on your own, we certainly do)”. AIG, just like the auto industry thought that the world had changed and profits would be easy for all and life was going to be good, and they did not manage their business well.

What happens to businesses that are not run well?
The answer to that is simple, right? They are weeded out of the system, the managers are gone, the company is gone, the good employees find other jobs, new companies step in and take over the void. It has happened with painful regularity since the beginning of the thing we call “business”. As a matter of fact, in China a new business fails every few minutes on the average, just in the Shenzhen area, and a new business starts that does it better. No one is immune to this, and the less government interference the better off the entire system is. If China understands this; why has the US Government forgot it?

What happens when good employees at a company find out that it may go bankrupt?
This question is the fundamental question that “work out” companies have to help poorly run companies answer. The best minds in the business, the best workers, the most creative, and the best contributors are the ones you want to keep; right? Well, guess what, those are the people who can find a job quickly and your competitors or peripheral businesses will absorb in a hurry. Those are the people you need to convince to stay and work hard to save the company.

I remember working for a company in the late 80’s that was losing several million dollars a month and was headed into the tank. The old president of the company sent out an edict to all employees to work harder, to stay at their desks, and to focus only on their jobs. Within a month the president was replaced with a true leader who looked around and called a meeting of the top 100 managers in and prospects in the company to a meeting and explained who we were going to turn around the company. Asked all of us to stay and see it through and said that many would not be able to finish the journey, but those that did were going to be rewarded. We who went through that call it the “North Bound Train Speech”.

His point during the speech was that we all had creativity and fire in our bellies and we wanted the company to turn around. We were all on a Northbound train. We could sit up near the engine, we could sit in the club car, we could sit on the back of the train, as long as we all worked to move the train North; however, if we wanted to go east, or west, or south, or even north by north west, we needed to get off the train. In less than twelve months we turned the company around, and in less then 3 years we were collecting profit driven bonuses, and many who were in that meeting did not finish the journey. Of that group we’ve had people go on to be General Mangers, CEO’s and so on of other companies over the years. But we all knew we needed the best people there to make it work. We saved at the sacrifice of 500 jobs (500 families who lost their paychecks for a time) over 8,000 jobs and have gone on to create many more since.

Good people stay if there is hope for personal reward. That is the fact of life and of business. Reward for me was knowing that I was instrumental in saving more jobs than we lost, and with it came financial gain, and more importantly knowledge that I have applied since at other places.

Let the companies that will fail, Fail. Let the companies that can turn around, turn around. Don’t interfere. AIG wrote contracts to keep its good people onboard and let the others go as they would, or stay as they would. Excellence was rewarded by cleaning house of the old dead talent at the top, and keeping the right people in place. Those people deserve a reward for their God given talent and their own personal work ethic to maximize the impact of that god given talent.

The US has always been the beacon to the world’s entrepreneurs and the hard working middle class to come and work to better themselves and to better those around them.

What does Government Do?
Well it passed a bill to bail out AIG (many times over actually). Government meddled in the natural cycle of business. Congress had the chance to change the law and tell AIG that those retention bonuses were null and void. But Congress does not do that and leaves them all in play.

The good people who stayed were legally and morally due their payment. There was nothing that government did, nor should they have done to prevent it other than just let AIG go through their own restructuring and let it fail or succeed on it’s own. Do you realize that if the Bailout had not been there, the issue of bonuses would be a moot point? So to me the root cause of the problem is solidly in the interference of government with the natural flow of the nature of our business cycle. Good companies prosper, bad companies fail and size is of no importance.

What did the Media do?
Well, the media smelled a good juicy story. The villains (that’s the good people of AIG who are staying to try to rescue the company and save the huge number of lost jobs a bankruptcy would cost) are rewarded by money. Hideous! People who are good at what they do, are recognized for doing it well, and are rewarded are the true villains here. Right?

Well, what’s the media going go report, that congress screwed up and that they did not put a provision in the bill to prevent the use of government or tax payer funds to pay for bonuses? Of course not, where’s the news worthiness of that? But take a family in a rich neighborhood, point a camera at them and an accusing finger, and being good at what you do, being intelligent, creative and loyal becomes a bad thing. Reward the poor performers and you have the majority.

What does the US stand for anymore? Is it the idea that good work, hard effort and great ideas get rewarded because they are the true economic engine that generates jobs and goods and comfort? Or is it mediocrity and government run businesses like in Argentina for decades, Russia for decades, East Germany for decades, Poland for decades, China for decades before the 1980’s. Can you name one successfully run government business anywhere in the world that could compete efficiently and effectively with the free enterprise system? Does anyone buy the Russian cars from the Russian run automotive industries of the 70’s and 80’s? What about the ASEAN nations that closed their borders for many years and protected their automotive industry; did the rest of the world buy those cars? No! Why not? Because government is not designed to make the hard business decisions that good companies make.

Why then is the government of the US getting involved in running big business?

Einstein was right you know. To do the same thing, over and over again (central government dictating to business how to be run), and expecting different results (expecting that the US will buck a trend that is as old as the industrial revolution) is truly the definition of insanity.

The final question is: is the US Electorate able to recognize the insanity of moving towards a socialist style government with central control; or is the lure of lazy life till the money runs out going to drive us to continue to elect more people to congress who want to run everything?

Finally, I ask myself the old lyrical question about a man who truly was excellent and worked very hard to do the most amazing feats in a highly competitive business; “where have you gone, Joe DiMaggio?”

Write your congressman, tell them we don’t want to go the way of the Soviets, the French, the Germans, the Fin’s the Swedes’, and all the other socialist type countries that are kept, by design, so far back of the US. It is not a sin to be good at what you do. But it is a sin to waste God’s talents given to you. He gave them to you for a reason and it was not to punish you for them.