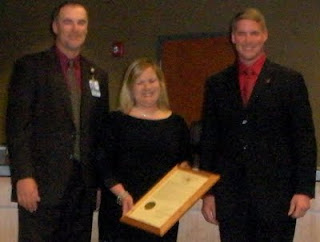 Lee’s Summit, May 22, 2010.  Today I received the news release from Missouri Representative Will Kraus regarding Jeanette Cooley’s selection and award as Middle School Principal of the year.  Congratulations Mrs. Cooley.

Photo: Janette Cooley, center, received a resolution from Representative Will Kraus (right) to honor her as the 2010 Middle School Principal of the Year.  Her achievement was also recognized by the Lee’s Summit R-7 School District and Dr. David McGehee, (left).

I decided to do a little research in addition to the news release because it is my strong belief that Teachers, more than anyone, truly influence the next generations of entrepreneurs, civic leaders and national leaders.  Too many when truly looked at don’t measure up.  Teaching is burdened with preparing people for the future, and it is too bad that some truly fail in that area.

The difference with Mrs. Cooley appears to be that she “gets it”.  Teaching is about high achievement and pushing the boundaries, so often put upon ourselves, aside and learning.  Socrates had a unique method of teaching, but one that still applies today.  His method was to get his students to admit, to themselves, that they did not know.  Once they understood that internally, then they were open to learning.  Learning is the greatest tool we have to improve ourselves.  Learning requires two things: 1) a good teacher, and 2) an open mind.  If you take away either of those then learning does not take place.

What makes a great Principal?  It takes the ability to push both the students and the teachers to do their best.  It takes removing roadblocks from teacher’s ability to reach the student.  It takes discipline to ensure that students focus on the right things.  It takes an environment not polluted by personal agendas, nor standardized tests, so that true teaching and true learning takes place.

The teachers I remember most where the ones that demanded the most from me.  They were tough educators who would not stand for mediocre performance from high performers, nor left behind those most challenged to understand the topic.  There is a balance that only educators find and maintain between both ends of the spectrum.  To borrow a term from the 1990’s it is mass customization.  Each pupil is given all they can handle, challenged to achieve and given the opportunity to excel.  It is not about reducing the standards but finding ways to work with each student to ensure they far exceed the standard because for a true educator there is no simple acceptance of “that’s good enough”.

Pleasant Lea, and the Lee’s Summit School district have that mind set.  They graduate the best students, most prepared to handle life ahead and they provide them with the confidence that they can learn whatever their life and world throw at them.  Mrs. Cooley, from what I’ve read about her and Pleasant Lea Middle School set that high standard.  They challenge their kids to achieve by bringing the community and the teachers together in programs like the “High 5”.

Pleasant Lea prepares their students to succeed, they challenge the teachers to achieve, and are lead by a team builder that accepts only the best from everyone.  In her webpage Principal Cooley states that “I am committed to fostering this rich tradition and culture of family while exploring with the school community ways to constantly access and improve opportunities for continued student success at Pleasant Lea Middle School.”

She has the diverse experience to do what needs to be done.  Again from her school webpage “I am currently in my 17th year in education, all of which have been served in the Lee’s Summit School District.  I taught 8th grade language arts at PLMS for 6 years, and then worked as an administrative assistant at PLMS for one year and at Summit Lakes Middle School for two years.  I then spent two years as an assistant principal at Lee’s Summit High School and one semester as an assistant principal at Lee’s Summit West High School.”

She has the education necessary to gain the respect of fellow educators and students alike.

She has the community contacts to get the immediate feed back from the city and the contacts to see what are the best practices throughout Kansas City, Missouri, and the rest of the nation as well as the Rotary Club where she is a Board Member.

But does all of this education, experience and community and peer contact truly work?  I think the answer is a resounding “yes”.

On Thursday, May 20, 2010, Rep. Will Kraus, R-Lee’s Summit, presented a resolution from the Missouri House of Representatives to Janette Cooley, principal of Pleasant Lea Middle School, during the Lee’s Summit R-VII School District Board meeting. Cooley has been named 2010 Middle School Principal of the Year by the Greater Kansas City Missouri Principals Association.

“A principal sets the tone for a school, leads the students and inspires the educators,” Rep. Will Kraus said.  “Principal Cooley has dedicated her time and efforts to the education of Missouri’s students and this is a well deserved honor.”

“Janette seeks to foster culture and traditions in the school to create a special place where the staff works together to always do what is best for students.  I commend her for her dedication to the student’s welfare,” said Rep. Will Kraus, “And I commend the community of Lee’s Summit for its support of our schools that enable such fine individuals to flourish.”