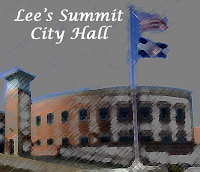 Lee’s Summit, August 18, 2010 – On a bright sunny Saturday morning I met Councilman Brian Whitley at City Hall for an interview.  My stated goal for the interview was rather simple: What is the function of a city councilman and what are the issues they face.  I asked Brian Whitley for the interview because he is a new member of City Council and represents the 2nd District where my family lives.

Right from the start our conversation was lively and focused on the points.  It is clear that Councilman Whitley is well aware of the issues that face Lee’s Summit and someone that does the research to know what he is talking about.  Also, and I found this refreshing, he is a good debater and is very capable of making and defending his points.

The interview took more than an hour and the material from it has given me more than one article to write.  There is a series of articles that I think give the space would be of interest to you, so I broke down the long article into a series, this being the first and we’ll see where they all take us.

Councilman Whitley took office on April 22nd and by our meeting he had roughly 100 days in office.  He serves in the Public Works, Solid Waster, Community Development Block Grant and the Lee’s Summit Main Street committees.

He represents 25,000 of us in District 2, and his policy is to respond to his constituents quickly.  If for example you’re calling regarding a flooding or water flow problem where the issue will not be present in 48 hours then, in those cases, he gets in his car and drives out to see the problem personally and in a timely basis.  “Those things are important, because in a matter of hours, there will be nothing to see, so it’s very important to be responsive” said Councilman Whitley.

This hit very close to home for me.  Those who’ve been following my opinion column know that I don’t particularly like the way Congressman Emmanuel Cleaver, while he responds to letters, he seldom listens.  In contrast, at the local level in Lee’s Summit we have Council members who do try to listen.  Not everyone can be happy with a decision, but if input is accepted and taken into consideration then there is more that can be done.

The first two questions I asked him had to do with his expectations going into the City Council and what he has found:

Q: You’ve been in office now for almost 3 months (since April 22, 2010), what are some of the things that have surprised you the most; since taking office?

I was expecting to have a bit more discretion and a bit more impact, but as any large organization it’s more than one person and it is more of a team environment.  There are a lot of structures in place to keep large fluctuations from affecting how the organization moves forward.

The process includes research by the city staff. The city employees a total is 617 people plus seasonal help.  They do research, report to the subcommittees to get further questions and once it is ready it is taken to the full council, consisting of eight (8) councilmen.  They vote on it, and the new ordinance or statute is put in place through the process.

Q: When you ran for office, I’m sure you had certain things in mind that you’d want to get accomplished when you reached the council.  Can you tell me what they were, and how they may have changed now that you’re in office?

In today’s environment you could almost give away land and no one would take it.  So you have to be very judicious in what incentives and what types of jobs you bring into Lee’s Summit.

I’m sure with every job the same expectations may be in place.  Lee’s Summit City council has their hands full with the economy.  It will take strong fiscal discipline to navigate the coming years.  Uncertainty, which affects businesses, will also affect Lee’s Summit.  Is Lee’s Summit a city that attracts jobs?  Will the City’s environment promote successful businesses?

The questions about the City Budget, and what it is doing to attract more jobs into Lee ’s Summit will be covered in the coming articles.