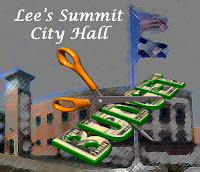 Lee’s Summit, August 20, 2010 – Continuing the series on the Lee’s Summit City Council; I was concerned about the budget.  I am a fiscal conservative and in my years in the business world I’ve learned that cash is usually forgotten, until the business has none, then Cash is King.  Managing the budget of a city is a difficult task.  In years of plenty they have to put aside for the years when revenues are not as good.

Since the end of the Bush Administration, and throughout the Obama Administration, this recession has lingered and it has reintroduced Americans to the values of a Savings Account.  One of my favorite authors is Dave Ramsey and the phrase that has always struck home for me, that he uses, is that you have to “live like no body else now, so that later you can live like nobody else.” And then he claims “where the (paid for) home, as take over for the Beamer as a status symbol”.  I think there is wisdom in those words, and I think they apply to the individual citizen as it does to City, County, State, and Federal Government.

Debt is the devil, and the lender becomes your Master is an old saying that applies today.  The more we owe others, the more they can influence our decisions: Because in the end, we must pay.

When I sat down with Councilman Whitley we talked about the economy.  I started by making the point that most economists that I read, tell the same story.  The bounce that is proclaimed as the recovery is not as sharp as it might have been, and it is truly running out of steam.  The lack of jobs being created, the continued layoffs are but two of the symptoms they point to.

Q: How is the Lee’s Summit Council reacting and preparing for the uncertainty in municipal revenue from all its sources?

The Lee’s Summit City Council and our City Manager use zero based budgeting, where every year, every department in the city has to justify every dollar of their budget.  The biggest issue is the revenue side.  Are the dollars we expect to be there going to actually be there.

Property taxes are just one of the revenue streams the city has.  As an example in a rough average for the period 2001 to 2006 was about 1,000 residential starts a year.  We’re currently running about 10% to 15% of that number.  The first half of 2009 was our low point with only 29 residential starts.

Property taxes account for 30% of the General fund, an additional 25% comes from the Franchise tax.  Those two funds are fairly predictable in comparison to the Sales Tax part of the cities revenue.  It accounts for 21%.  The rest of the general budget is made up of:

I’m fairly confident in the budget for revenues as it stands, I voted for it.

They key point to me about the previous question and one that I think helps us all to understand the mindset of the city manager, the mayor and the council is that there is a fiscal discipline that starts with justifying the first dollar to be spent on a given fiscal year.

The diversity of revenue sources is encouraging, and as Councilman Whitley said “In two years the TIF for Summit Woods expires and that will be a welcomed boost to the revenues.”  Yet the key is not just controlling our spending, as important as that is.  They key is to find ways to increase our revenue base, not our individual taxes.  To that end I asked the following question.

We’re transitioning from a quick growth city, to maturing and moderate growth city.

Current growth areas, outside of the areas that served by various groups for future development, include Highway 50, South of Legacy park, 470 and then there is re-development areas in the downtown core area, as well as 291 and 50.  This is an area that city council and the mayor went to Jefferson City to try to find some incentives to redevelop the area.  “Of course, there isn’t that kind of money around but at least we are trying” said the councilman.

The purpose of the redevelopment effort is for properties that outlive their useful life, to be upgraded or replaced with something that will enhance the Lee’s Summit business community.

One of the success stories was the old AT&T plant (The Summit Technology Center).  The effort, while it may appear counter intuitive, was to remove the center section of the building, open it up with a plaza area that provided more light, and a more pleasant rental experience.  While most of us would think that the reduction in rentable space would be a negative, in fact the new environment it created brought in a higher rental price per square foot, and a higher occupancy rate that more than made up for the reduction in the total available square footage.

Additionally Lee’s Summit has set up a “Developer’s 101” class.  Some developers have a professional staff that knows how to navigate through the two inch thick binder of regulations and forms required doing a development.  Entrepreneurial firms, many times, don’t have the staff or the experience to do it efficiently; adding to their burden and start up costs.  The city has put together a program to help them navigate the process simply, efficiently and effectively.  The objective is a simple one; increase their chance of success.

We, as in the City, don’t want to have businesses lease space and then failing, it creates a negative vibe throughout the area, so we try to help them focus on success.

There are many questions that spring to my mind from these two.  The challenge for all of us in Lee’s Summit is to remain abreast of what is being done in terms of development for our city.  In the last 12 years I’ve seen positive changes in the city, and with the new Mayor, and new Council Lee’s Summit is at the crossroads.  Will it bring new businesses to keep people working here, or are we going to be like a Nova (a bright flash of light, followed by the extinction of the star), or are we on the longer more arduous path to a solid economic expansion, bucking the national trends?

In the next segment, I’ll talk specifically about the Lee’s Summit Economic Development Council and whether or not it is worth the money the city spends on it.