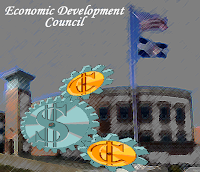 Lee’s Summit, August 24, 2010 – In this, the third part of my series on City Council I wanted to spend some time getting to understand what the is going on in terms of Economic Development.  As Councilman Whitley and I talked, this was an area where his background working for the Federal Government’s office of the Inspector General started to come through.  He understands the responsibility of returns for our tax dollar investment.

The City of Lee’s Summit provides $260 thousand dollars, approximately, to the Economic Development Council.  Before my meeting with Brian Whitley I had no idea whether that money was well spent or not.  Here’s what I asked, and the discussion that followed:

Q: The second high priority goal of the city is stated as: Conduct an evaluation on the effectiveness of the current structure of the Lee’s Summit Economic Development Council. If the evaluation is favorable, the Lee’s Summit Economic Development Council (LSEDC) should continue to operate independently from, but in concert with City government.  In general terms, what successes has the LSEDC had in bringing new jobs into Lee’s Summit?  Where do you think the next opportunities will come: Manufacturing, Technology, Service, other areas?

Jim Devine is the lead of the LSEDC and they are working hard to bring new businesses into Lee’s Summit.  It is one of the tools the city has, and the investment proves to be worth while.

There has been some precedent for success in other cities by bringing in a cultural center as a draw and a marketing tool like the Arnold Hall renovation, right now all done by private donations, and last month they had a nice fund raiser.

Investor tax credits are another tool.  We could implement a 50% tax credit for early or angel investors in Lee’s Summit.  This helps the start up investor abate some of their risk, but the city has to be careful in how it manages the incentives.

This is what I have a lot of angst with.  We have to find that sweet spot where we don’t give away the farm, but still provide the incentives to bring in the jobs.

The state of Kansas has good incentive programs, and we constantly compete with Johnson County as well as Kansas City both who have made the decision to use tax credits for early investors.  But we have to find that fine line where the incentives bring the benefits and long-term sustainability.

Councilman Whitley is not certain that the tax incentives are the sole reason why Johnson County is so successful, but it likely plays a role and maybe a significant role.

The Strategy of the Lee’s Summit Economic Development Center is four fold.

Jim Devine is the head of the LSEDC and was recognized earlier this year as one of the best in his profession.

Some of the success stories include Acceleration, LLC which was named by Ingram’s Magazine as the fastest growing company in Kansas City.  It is a contract research organization that assists in drug development for pharmaceutical companies.  It has grown an incredible 973% over the last 4 years

Other companies that have benefited from Lee’s Summits efforts are ViraCor Laboratories, National Avionics Association who relocated to Lee’s Summit, Purple Wave (an Auction Company) chose Lee’s Summit for its KC office, Kokam America’s received a $25 million bond that will allow the company to purchase machinery and equipment to manufacture its revolutionary, game changing Superior Lithium Polymer ion batteries.  This phase of the company’s expansion will ultimately bring more than 200 jobs to Lee’s Summit, and if they win the federal stimulus grant from the DOE Kokam can grow to over 1,000 jobs.

Further, the LSEDC has brought in 7 new companies (IRS, Fencepost Media, Spectrum Consulting, Kiewit Engineering, Safetran Systems, Rio National Insurance and Invensys) that absorbed almost 100,000 square feet, invested over $4 million dollars and brought in just under 400 jobs with an average salary of over $46k a year.

Awards and recognition have flowed into Lee’s Summit.

Portfolio.com recognized Lee’s Summit as a Wealth Center and ranks 103 of the nations 420 largest cities surveyed.  Jim Devine, President and CEO of LSEDC was named as the 2010 Professional Economic Developer of the year, by the Missouri Economic Development Council.  Missouri Arts Council named Lee’s Summit as Missouri’s 2010 Creative Community.  BusinessWeek ranked Lee’s Summit as one of the fastest growing communities in 2010.  Lee’s Summit downtown is named one of the nations Top 5 downtowns, winning a 2010 Great American Main Street Award from the National Trust for Historic Preservation, and for the second consecutive year, the FIRST Robotics teams from each of the three Lee’s Summit R-7 high schools qualified for the World FIRST Robotics Championship.

It is obvious that Lee’s Summit can and has attracted technology oriented companies and high paying jobs into the city.  These types of jobs provide people with the ability to raise a family and enjoy what the city has to offer them.

“We have a lot of businesses that are thriving and looking to expand here in Lee’s Summit, our challenge is to keep them here, provide them the tools to expand and keep them from flying to Johnson County or elsewhere” said Councilman Whitley.

I started this segment by asking, is there a good return on the investment in the Lee’s Summit Economic Development Council, when I posed the question to Brian Whitley he said, “The EDC has receives $260 thousand a year, but they’ve shown an economic impact to the city of $4.1 million dollars.  That’s a good return on our invested tax dollar.”

In the next and final segment of the series on City Council we’ll go into the impact of the November 2nd election and how, if in any way, it can help the City of Lee’s summit attract new jobs.