Lee’s Summit, August 3, 2010 – The primaries are over in Missouri and the message is clear: True Conservatives Win and the political machines and special interests are told, thanks but no thanks.

The work for most is just beginning.  November 2nd is just around the corner and the energy of the voters has to be maintained.  Campaigns get to celebrate that they won tonight, but tomorrow the work begins.

U.S. Senator for Missouri will see Democrat Robin Carnahan who received 264,742 votes, against Roy Blunt who received 409,806 votes.  Roy Blunt has one tough job ahead of him, proving that he truly is a conservative and not just a “primary” conservative as many of us fear.

U.S. Representative for the 5th District saw Jacob Turk take a commanding lead.  His memory of 2008 is not lost.  His work is cut out for him.  He has to face Emmanuel Cleaver but the message to Cleaver is very clear: Prop C 71.1% Yes, and 28.9% no.  Emanuel Cleaver ignored the will of the people he represents.  He put Obamacare ahead of the best interest of those who elected him.  If Turk can push the momentum forward this November he will defeat Cleaver, and a true conservative will take the seat. 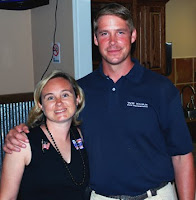 State Senate race for District 8 here in Lee’s Summit was a very close race.  I personally was disappointed in the last minute intrusion by special interest groups that focused on running a misinformation campaign against Will Kraus.  I’ve written about that a few days ago, so there’s no need to go over it again.  Suffice it to say that Will Kraus defeated Bryan Pratt by 601 votes.

This sends a strong message to Jeff City.  Politics of special interests won’t get you elected, nor will the citizens of Missouri stand for it.  We do our homework.  We do our research.  We know who we’re voting for.

In the campaign watch party tonight, I was able to talk to Representative Will Kraus about the importance of the election results; he said “It was a hard fought campaign on all sides.” He added, “The voters looked at the candidates, and decided on the true conservative to send to Jeff City.”

I believe that was true across all the races.  Voters truly seem to focus on the fiscal conservative nature of the candidates, and vote for those who have the courage of their convictions and stand up even against leadership for their constituents.

State Representative for District 48, the term limit vacated seat by Will Kraus will see Democrat Gavin Fletchall (1,459 votes) will meet Gary Cross (2,347 votes).  Garry Cross will have a tough race considering the democrat base in Raytown.  His campaign will have to focus on bringing out the conservative vote for a businessman running for office.  The lessons learned in business will serve him well: being a fiscal conservative in business is a matter of survival.  Those habits won’t be broken by the political pressure of Jefferson City.

Proposition C passed overwhelmingly in Missouri.  A total of 938,782 votes were cast, with 667,680 or 71.1% voting for Prop C.  This sends the first ballot measure message to Washington.  Missouri is a sovereign State and the Federal Government cannot come to the citizens of Missouri and force them to buy health insurance, or impose a penalty for not buying it.  Many argued that this was a futile vote, but in light of Virginia’s victory in court against the Federal Government should bring hope to the voters of Missouri who were ignored by Representative Cleaver and Senator Clair McCaskill.

For Emmanuel Cleaver he should look clearly at the Jackson County results for Prop C, where 54,442 votes were cast, and 38,945 voted yes for 71.5%, and in Kansas City only 29,001 votes were cast with only 16,383 votes against.  Had Representative Cleaver paid attention to his constituents perhaps he would have voted No on Obamacare.  November looms close and as all politicians do from time to time, he’ll have to answer for his vote to the voters of the 5th Congressional District.

When each of these important races are reviewed carefully it seems clear that Missourians are not fooled by special interests, nor by dirty political tactics and we focus on the character and record of those we elect.  If that is an outcome of the 2008 election cycle, then it perhaps was worth it.

The vote is a very important thing.  I was telling my wife today when she pointed out I was still wearing my “I voted” sticker.  As a naturalized citizen of the United States I have a strong feeling for the value and power of the vote.  The right to vote comes with a strong responsibility: do our homework, and vote for those we believe will represent us the best.  I think Missouri really gets it, no where more evident than in the State Senate District 8 campaign.

Now we have to focus on November and do our homework between now and then.