Redistricting of Missouri; a call to citizens to speak their mind

Lee’s Summit, April 18, 2011 – Every 10 years politicians protect their own; it is time for Missouri to stand up and speak out; or accept the consequences for the next ten (10) years.
Since I earned the right to vote in 1992 at the tender age of 34, I paid attention to politics, but mostly kept my opinion to myself.  In 2008 I realized that this country was built on opinions expressed openly, honestly and as factually as possible.  Let the debate settle the question in the end.
In 2010 we had the census as is called for in the Constitution.  We all were counted, one way or another, and Missouri lost people to other states, and thus we lost one seat in the Congress.  That means the current Missouri Legislature, among all their other duties have to redraw the district maps.  The last time we lost a seat in Congress was 30 years ago.
We the people of this state have a responsibility to let our Congressman, and our Senators know how we want to be represented.  We all tend to behave as I used to; quietly grumble at the water cooler and then move on to our work day.  What has that attitude brought us:
1)      Higher taxes
2)      $14 Trillion in debt
3)      Recession that only the politicians feel is improving
4)      More regulations than anyone in business has time to read
5)      More government intrusions into private citizen’s lives.
To those who read my blog it will come as no surprise that I believe Congressman Emanuel Cleaver is one of the reasons why the last congress let spending go out of control – even worse than the previous congress.
Cleaver voted for:
1)      The Health Care Reform act.
Brace yourself for British style rationing of care:  That too far for you; no problem, ask the mother and father of the Canadian baby Joseph who was pulled from life support at the decision of the government (read more here).
2)      TARP 1, TARP 2 (Toxic Asset Recovery Plan) – money that went to the banks (did you get any back?)
Bush was dead wrong, Paulson was dead wrong, and Obama and the last congress were worse because they knew it was wrong, and the doubled down on it.
3)      Economic Stimulus Plan (the first bailout) – that the numbers show has not helped employment, but has required the bureau of labor statistics to change the counting rules to show unemployment is down to 8.6% because the rules excluded 2.4 million persons “…because they had not searched for work in the 4 weeks preceding the survey…”
I wonder if they know they are no longer unemployed.  (if you don’t believe me, check the BLS site by clicking here)
4)      Wall Street Reform – that most experts say gave Wall Street more power and less oversight, while creating a larger bureaucracy in Washington.  One that many believe will actually put the US at greater risk of major financial crisis (read more here).
These are things that Congressional Districts mean to you and to me personally.  Gerrymandering is wrong:  Period, end of sentence.
What is Gerrymandering?  Here’s the Merriam-Webster definition:
1: to divide (a territorial unit) into election districts to give one political party an electoral majority in a large number of districts while concentrating the voting strength of the opposition in as few districts as possible
2: to divide (an area) into political units to give special advantages to one group
I don’t agree with “defending” seats in congress or in government.  When politicians split up natural voting groups to ensure that one party or another has a lead, politicians may win but I know that the citizens lose – every time.
Why do politicians get away with gerrymandering?  It’s simple; we let them.  Don’t let them this time.
Last November I was happy to see Senator Will Kraus fight so hard to win a race he was destined to lose.  Big money came into the district and there was a strong pull for one side.  Senator Krause fought valiantly and tirelessly to make sure people saw him, got to know him, understood his values, achieved a sense of how he would vote, and made the decision to elect him.  Who won?  The people of our district because it was an open and fair contest of ideas, and hard work backed by a proven record in the Missouri Congress.
In the same election Gary Cross fought to overcome the obstacles present with a district that narrowly swings to the Democrat side, but his work and effort and record spoke loudly and he too won election, but in the end it was the people of the district who won.
In neither case did the people simply win because they elected these two men to represent us; they won because they had a chance to make their vote matter.  There was enough of a common locality that the people understood the issues of the district and had a fair fight in their hands.
That is not the case in the US Congressional District #5, that re-elected Emanuel Cleaver for another term in office.  Jackson County had a record turnout and a strong support for Jacob Turk.  The vote in this part of the District was predominantly conservative and we were electing Jacob to represent us.  Then the Kansas City returns came in; and the election was over.  The predominant Democrat voting Kansas City outnumbers the rest of the district and Turk lost – again.
Worse than Turk loosing was the fact that the 5th District lost the chance at a fair electoral fight: The Fifth District was – many years ago – gerrymandered to provide a Democratic seat in congress.  We allowed it.  It is our responsibility.  We punted and we have the results to measure our lack of participation in this process.
This year it is our turn again.   Are we going to speak up and let the Missouri Legislature know that we disagree with the current maps?  Do you even know what the current redistricting maps look like? 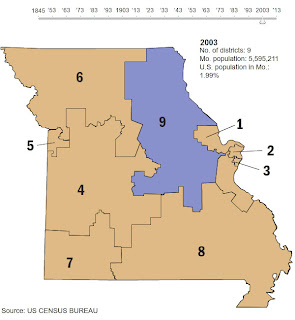 The current map for District 5 shows a rather odd shape when put over a county map.  It is obvious that something is being done with it, but since it has been the same shape – mostly – since 1993 it might as well be left to be what it is; at least for the point I’m trying to make.
There are two proposals being evaluated now.  Take a look at District 5 and notice the major change that is being applied to the 5th Congressional District.  As you can see Missouri is going down from 9 down to 8 Congressional districts. But a good look at district 4 shows a small reasonable change for both the House proposal and the Senate proposal.  Districts 6, 7 and 8 remain much the same.
A close up view of District five (the left picture below is the current district boundaries) shows that it will have a major change.  But if you look closely you see how a major section of Jackson county will be part of the 6th Congressional district.
This makes no real sense unless you study what the politicians in Jefferson City are trying to do.  The Gerrymandering is not as bad as can be seen elsewhere in the united states where Districts have, in the past, been drawn only a few city blocks wide and very long to reach a specific political demographic group that meets the requirements of the current party in charge.
Both Democrats and Republicans are guilty of such practices.  This is not about political boundaries, but about targeting certain districts to specific parties regardless of what is best for the country as a whole.
There is no place in the constitution that tells us that there are to be Democrats, Republicans, Libertarians or any specific party properly represented in the Capitol.  No, it says that the enumeration of the people is to be used to apportion representatives to the House of Representatives.
As a Lee’s Summit resident, and a constituent of both Representative Gary Cross and Senator Will Krause, I will be contacting both and asking them to keep Jackson County whole in the re-districting of Missouri.  Let the voters of Jackson County and the rest of the 5th District elect representatives based on their ability to represent the people, to be leaders in congress, and to ensure that the United States and its citizens prosper – regardless of political affiliation.
The 6th District is a rural district and its needs need to be properly represented.  To add to it a large portion of the Lee’s Summit City will not help the 6th District and it will not help us here in Lee’s Summit.  Rural communities have their very own specific needs.  Those should not be diluted by the needs of those of us who chose to live in the metropolitan area.  The same is true when considering the needs of a metropolitan area in comparison to the surrounding rural community.
I think I would be just as negative on this plan whether I lived in 6th District as it currently stands, not wanting the large numbers of City voters affecting the person we elect for a rural district.
We cannot sit idly by and not make our opinions know to those who represent us.
Call, write, e-mail, or text your State Representative and Senator and let them know that the current redistricting plan is bad for Missouri, it is bad for Jackson County and it is bad for us in Lee’s Summit.
Respectfully Submitted,
The Lee’s Summit Conservative
Paul Zainea