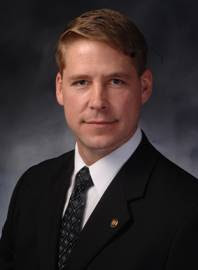 There is a State Representative I met a few years ago on my front yard, who was running for District 48 in Missouri.  A veteran and a person with a positive outlook and it has shown in the legislature he has pushed forward in Missouri’s congress.  He is the Vice Chair of the Utilities committee, Vice Chair of the Health Care Policy Committee, and a member of the Job Creation and Economic Development committee as well as a member of the Real ID & Personal Privacy Committee.

He works hard for us in the 48th District and then he works hard with his family and with his military obligations to ensure that he does not let people down.  Will Kraus just spent time in Uganda on a training exercise for the U.S. Army Reserves.  He tells the story of an “impromptu” assistance effort.

In the hotel, one of our waiters told us that he makes about $150 a month. He was given a plot of land to build a house on, but it was going to take him two years to earn the money to complete his home. So we took up a collection in our unit and passed some bottles around the Chinook when bringing soldiers back to Entebbe. We were able to collect over $500 to help him out.

He has the conservative values that keep him on the “fiscally responsible” side of the issues.

On Veteran’s Day, November 11, I will be greeting veterans at an Applebee’s Restaurant in Lee’s Summit.   On that day, all Applebee’s restaurants have invited veterans and all active duty military personnel to enjoy a free entree in appreciation of their service to our country.  I will be at the location on 1501 N.E. Douglas Street from 5:30 p.m. to 7:00 p.m.

Originally proclaimed after World War I as Armistice Day, in 1954, November 11 became a day to honor American veterans of all wars. I’m looking forward to having the chance to personally thank our military personnel at Applebee’s on Veterans Day.  I know what loyal and courageous individuals they are, and I want to help honor the sacrifices they have made to keep this country safe and strong.

In addition, also on Veterans Day, Hy-Vee is sponsoring a free appreciation breakfast for the military.  On the evening of November 16, all Golden Corral restaurants will also provide a free dinner to all veterans as part of its annual Military Appreciation Monday from 5 p.m. to 9 p.m.

Applebee’s, Golden Corral and Hy-Vee have all made a special effort to show gratitude to our men and women in the service. I urge everyone to get the word out to their friends and neighbors in the military to take advantage of these offers.  You can even forward this e-mail to them with a note thanking them for their service.

Veterans and active duty personnel should bring proof of service to Applebee’s.

Join in to help celebrate our Military; those men and women serving in harms way because it is the right thing to do for all of us who cannot do so here at home.

God Bless the soldiers and their families for all that they are doing.