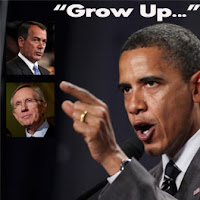 Lee’s Summit, April 5, 2011– OK, will you explain something to me please?  Was the 2011 budget not the responsibility of Reid and Pelosi last year at this time?  Why are we still talking about it?  Oh, yeah: Because they did not do their job in the Pelosi Congress so now Boehner has to resolve the old issue.

So, again, if that is a fact (and I don’t think you can dispute that “is” a fact) then why is President Obama saying (Fox News Story), “We’ve already done that twice…That is not a way to run a government.  I can’t have our agencies making plans based on two-week budgets.”

I’m shocked, no not mockingly but seriously.  I’m truly shocked about the “two-week budgets” comment.  Nancy Pelosi should have done this in 2010 and the Government has been running on Continuing Resolutions since September 30, 2010.  It’s not two weeks, or four weeks, and it’s not even six weeks.  It has been nearly twenty seven (27) weeks (actually 188 days).

In 2009 and 2010 President Obama said, when speaking about Obamacare and the Republican opposition that “Election’s Matter” and it was widely interpreted (and acted upon) to mean Democrats won, Republicans lost so we run the show now.

The beauty of the American system of governance is that in November 2010 we had another election, and the wisdom of the Founders was demonstrated again.  When 100% of the House of Representatives had to fight for their jobs, the people voted and sent a far more Conservative group to Congress with the demand that they “cut the budget and restore fiscal responsibility”.

Boehner, the Republicans and more importantly the Conservatives have been debating and arguing over the 2011 budget; with a promise to keep “cut the budget for 2011 by $100 billion”.  Now the pro-rated numbers are between $33 and $61 billion.  Personally I think there is $100 billion to cut; but I’d be happy with only $61 billion.

Yet President Obama is quoted in the Huffington Post as saying “…American public expects that its leaders “act like grown-ups, and when we are in negotiations like this, that everybody gives a little bit, compromises a little bit in order to do the people’s business.”

I can’t believe that quote; yet it read it and found the context to be accurate.  So, wait one minute; it was ok for Reid, Pelosi and Obama not to do their job when they controlled both houses and the presidency.  Now Boehner is the one that needs to grow up?  Or maybe I have it all wrong, and what President Obama stated was a rhetorical question about the last Congress.

Let’s us cut to the real heart of the matter.

1.    We are operating the Government on a $1.2 Trillion budget that was not approved by Congress.

2.    The Pelosi Congress failed to pass a budget, but through continuing resolutions loaded a $105 billion requirement to support Obamacare implementation.

3.    The House of Representatives passed a budget.

5.    Representative Boehner (yes Speaker of the House) has been negotiating not on the bill passed, but simply to try to get a deal that Senator Reid will deem to vote on.

6.    Reid claims that the fault is with the House Republicans listening too much to the Tea Party (should have said Conservatives, but that’s ok).

7.    Obama claims “…I can’t have our agencies making plans based on two-week budgets…”

I’m truly confused and ready to say “Go ahead, shut the government down; please.”  If you can’t agree on the $61 billion (or its prorated amount) now; what chance does America have of ever being prosperous again?  Taxing the population like some medieval surf is not going to get us out of the financial disaster quickly approaching.  No, a prosperous economy is what it’s going to take.

Shut the government down, and let’s hear the voice of the people like we did in November 2010.  One way or another we’ll know exactly what the American people truly want.

If you’re reading this, and got this far: What do you want from congress? More taxes? Any Budget? Or, do you want fiscally responsible actions that restrain government from over spending?  Speak up; I’m curious to see if I’m the only one who feels this way, please.