The Give Me Liberty Rally in Lee’s Summit

Lee’s Summit, July 7, 2010 – Today there was a gathering of conservatives in Lee’s Summit: Some 750 to 1,000 people showed up.  They came from Clay and Cass counties as well as from the city itself.  The gathering flowed nicely into place in front of the Lee’s Summit City Hall around 6:00 PM.

I have to admit, this was my very first political rally.  The reason is that I was brought up to not talk politics or religion.  So till 2008 I kept my thoughts to myself and let my voting stand on its own.  Then I realized that there was more to it than simply voting.  People need to get involved.  As was repeated at the rally “If it is to be, it is up to me (each and everyone of us)” 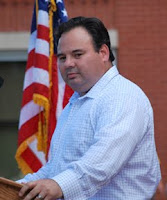 The invocation was given by former Judge Bill Lewis, then Tim Flook, Missouri State Representative (34th District) from Liberty lead the crowd in the pledge of allegiance.  He is an interesting individual.  Has a law degree, and is part of Flook & Graham so he has experience with creating jobs.  But what really struck me as I researched him is that he is a member of the Hispanic Bar Association of Kansas City, and a member of the Hispanic Chamber of Commerce.  This man has a diverse background and is in touch with the greater Kansas City area’s Hispanic community.

He gave a very moving speech about freedom:  The freedom that entrepreneurs need to create jobs, to move the economy along and to bring wealth to the country. 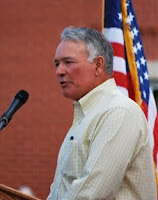 Hal Sweeny, a farmer, gave a speech on the effects of Cap and Trade on the farmers of America who grow the food we all eat.  “Each input to my farming operation will cost more, from electricity to feed” said Sweeny pointing out the negative effect of the bill.  He concluded his remarks with “we should let the entrepreneurial spirit and drive lead us out of this recession, and not the heavy hand of government.”

Woody Cozad spoke next.  He is the former Missouri GOP Chairman.  His comments answered a question many have: Why is this an issue now, and not during the last administration. 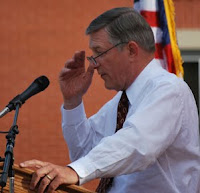 Cozad pointed out that the current situation has been coming for “four score” years.  He added that in the last 80 years, only one president truly balanced the budget.  It certainly was not FDR, Truman, Kennedy, Johnson, Nixon nor Reagan.  I was not Bush, nor Clinton.  He pointed out that with the GOP in charge of the Congress; still the only way that Clinton balanced the budget was through the use of the Social Security Trust fund.  The only president in Eighty years was Ike Eisenhower who did it three times during his tem in office. 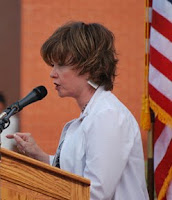 This problem we have now is not a simple one man problem.  It is a problem that is being compounded exponentially by the current administration and congress, but the fact is that each of the previous presidents and congress contributed their piece to the problem.

The problem we face now is that we have to fix it.  It took 80 years of bad budget management and saying yes too many time when we should have said no.

Jane Cunningham, Missouri State Senator, District 7, Saint Louis spoke about Health care reform. She made many good points about the costs to the individual states to make Obamacare work.  A tax burden that no state can bare the brunt of even in good economic times.

The key point she made was that Missouri is the first state to bring legislature against Obamacare to the voters in Proposition C that will be on the August 3rd Primary Ballot. 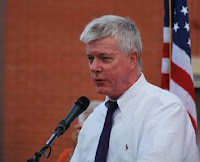 Lt. Governor Peter Kinder was the keynote speaker at the rally.  He announced the law suit he is bringing as a citizen of the state of Missouri against the Health Care Law.  He and three others joined in bringing this lawsuit.  The fundamental claim is that this law exceeds the constitutional rights of the federal government, as well as equal access under the law.

The group spent their time listening and discussion what they had heard as it left carrying signs, and knowing that in the end it is the sum total of their votes that will make a difference.