Why I still say NO to the Automaker’s Bailout?

It seems like a very simple question, doesn’t it? Well, I’ve been wrestiling with the best way for me to explain why I feel the US Automakers are: First, taking a bad rap for the value perception of their cars, and Second they are in serious need of replacing.

I think I’ve hit on it and let me give this a try by working from a hypothetical situation where in a galaxy far away two Auto Makers are allowed to experiment over a long period of time. One Automaker pays his workers on the average $74.00 per hour and the other pays $ 48.00 per hour including workmans’ compensation, vacation time, sick time, health insurance.

Both Companies are going to have the best supply chain and will not have a significant difference, other than the difference in design and styling and the subsequent cost of components. But in general their raw materials will be on the average the same.

Efficiency will be allowed to change based on the labor contracts that are applied to the conversion of raw materials into sellable finished goods. 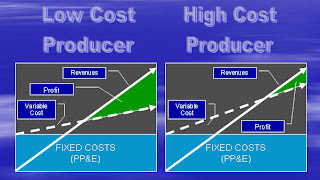 All of this is shown in figure 1 the Break Even Analysis for each company, at the end of the first year. The fixed costs, at the bottom of the charts are identical. The revenues (the solid white line) are identical. The Variable costs have two parts. The first part, the raw materials, they are all identical. The second part, the efficiency and labor costs (the effect of the labor contracts, process control and flexibility, quality assurance, etc.) are allowed to vary (that’s the dashed white line). The green area between the two lines is the PROFIT left after all the bills are paid.

What advantage does the low cost producer have over the high cost producer, especially in the automotive industry? Since the automotive industry is cyclical everyone, including our two companies in the galaxy far away have to store cash in the good times, to survive the lean times. So the first order of business for our two companies is to hoard cash till they can survive the average downturn in the industry. Let’s call it 28 months, just a bit over two years on the average. This is a purely made up number. So, if our companies burn $1billion per month, they must stock up $28 billion just for the next down turn.

The second order of business is to fund the Research and Development budgets to ensure we have the best cars, with the best and most reliable technology. Which of the two producers do you think is going to be able to do that sooner? Obviously the Low Cost Producer.

After that there are a myriad of projects, and programs both for the automotive departments, but also for the labor force. Programs that help all grow in the company and contribute further to the great efficiency gains that keep companies afloat, and allow other’s to sink.

I’ve received a few comments that put the blame on the management team at Chrysler, Ford and General Motors for not making cars that the consumers want. The most common comparison is the Honda versus the Malibu; let me throw in there the Ford Taurus just for fun. The complaint is that the US automakers cannot produce a car with the engineering of Honda, Toyota, Nissan, not even the upstart Hyundai. The blame is placed on lack of engineering and effort. Some go further to say that BMW, Daimler Benz and the other European car makers (all subsidized by their governments because alone they could not make it) pay as much as the American Autoworkers get paid, and they are doing fine and are better perceived than the US Car makers.

If it was all so perfect in Europe, why is it that they come to the US in search of lower operating costs? Could it be that they too [the European Automakers] understand the difference between being the low cost and the high cost producer? And, they are seeking the lowering of their costs and the improvement of their efficiencies?

In my opinion, the Automotive Industry in the United States is being held hostage by the Labor Unions who have forgotten the old credo “only fat pigs go to slaughter”. If your greed, such as people claimed it was on Wall Street prior to the end of September, gets the best of you, you will lose, period, end of sentence. Right now the labor costs are completely out of control and the efficiency in the country where we have the best efficiency in just about every industry (dollars of input compared to dollars of output), in the Auto industry we are far behind foreign companies building cars here in the United States with the same workforce, just a different labor contract.

Wake up America, the problem is that the greed we fear in Wall Street is in a small group of Union Halls choking the living blood of the Auto industry. The worst part is that I do not blame the Unions. Their job is to ask for the moon and a silver platter and fight for the right things, the needed things, the things that protect workers. However, the unions involved, and not all I might add, have forgotten the nature of bargaining in good faith and for the goodness of all involved.

In the late 40’s during the conversion from war time production to the consumer production, then the 50’s and 60’s the Unions could ask for whatever they wanted, Detroit just produced more cars and supplied the world’s automotive needs. In the 70’s things started to change as Japan came up to speed, and then beat us in the quality war and in the 80’s taught us Quality Control. In the 80’s is when Detroit should have figured it out and stood up to the Unions and Government and said that the easy years of no competition were completely over. It was time for Detroit to remember the lessons taught by Henry Ford, “be the lowest cost producer”.

Detroit [the CEO’s and all the “C” level management] did not do what they knew they had to do, and that’s when the beginning of the end for Detroit’s dominance over the automotive industry started. Iacocca had some success for a while, then he lost his bearings. Ford and GM laughed at little Chrysler. Now all three need to come up with a plan to survive, and they do not have a clue.

The Volt is not going to be the Mini Van of the 80 and the SUV of the 90’s. The hybrid is not enough for Ford and Chrysler and they are far behind the curve against Honda and Toyota who’ve had hybrids on the road for several years. Poor management is the cause of all of this. Poor labor cost management is the culprit here. Allowing runaway labor costs, pension costs, health costs, and the total benefit package is what’s killing Detroit, because the guys who invented the industry in 1908, have allowed themselves to become the high cost producers in the world.

The more they spend on labor and conversion costs, the less they have for R&D and Styling and alternate technologies research. In the end, the low cost producer is also the one that makes the best luxury car for the money.

I still say NO to the Automotive Industry Bailout. They won’t change and I repeat myself but I must, to continue to do the same thing and expect different results, is the definition of insanity according to none other than Albert Einstein.