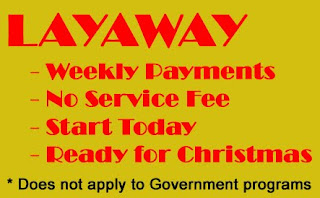 I’ve been listening over the last few weeks as the debate over the healthcare bill continues to rage. I’ve tried to sit back and look at it from a different point of view. I even spoke at length to a friend of mine who actually supports the CONCEPT of social medicine as a right to humans in a country like ours. Their argument being that their parents suffered outside the healthcare system because they could not afford it. But in the end, I think the philosophical divide is too wide.

I then started to look at the nuts and bolts of the supposed bill that is floating through the halls of congress and one thing hit me very hard. This is a lay-away program!

When I first came to United States back in 1970 we had a large grocery store with a basement that sold clothing as well. The place was called Shop-Rite. I was a 12 year old immigrant that had just learned to speak English and there was a large sign over something that I wanted: Lay-Away! The concept is amazingly simple. You pay a bit each week, when you have the item paid for you get the item. And you owe nothing because you paid for it before you got it. No credit card. No loan. No hated January bill day after Christmas. It was paid for.

However, our Government got that wrong too. They expect us to pay from 2010 till 2014 to build up a fund. The fund driven by taxes for healthcare that will come from our wallet. We get to pay for 4 years, and then start to get insurance from the government. Something just seems wrong to me here.

I pay for insurance that I don’t get to use.

I pay for my portion of the insurance that my company helps us buy.

I pay my co-payment for the insurance.

I simply pay double for what I was getting before. And I only get for what I was paying before. So all I can see is that I’m going to pay more taxes, trust the government to keep that money safe and well invested, and then that they will provide me with equitable insurance to what I have now.

Wait, one more thing. I will continue to pay after the 4 years, so I don’t even get healthcare at no additional cost; I just had to put money away in the Treasury and trust that they will use it for my insurance.

OK, well this looks a bit odd to me.

When my company brings in a new insurance company to provide healthcare coverage for all of us employed, and before they start to get my money; they explain in great detail what options I have. The show me what I’m going to get in detail for my money before one dime of my money goes to them. I get to make the choices that I can afford and then move forward.

The bill being pushed through congress will reach into my pocket, take money from me for a program that won’t be installed for 4 years, and then I don’t even know what I’m going to get for my money. Does this seem odd to anyone? I’m sure it does!

So here’s my question; if you and I can see how odd this is, why can’t our Congressman, and our Senators realize that no one like to buy a “pig in a poke”.

I’m writing my Senators and my congressman to let them know how I feel; I hope you are too.

I’m writing those who are running against my Senator and Congressman to make sure they know why I’m going to vote for them, so that perhaps they won’t make the same mistake.

Here’s the fundamental contract between us (the great unwashed, small minded, ill informed masses) and our Representatives in Congress: We vote for you, you represent us. Claire McCaskill has failed in this contract, and so has Representative Emanuel Cleaver. We, the people of the State of Missouri, when polled have shown a super majority against the Healthcare Bill; yet they are voting for it.

They have the choice to not listen now. We are stuck till the next election. But I don’t think a state who’s motto is “Show Me” will forget that those we voted into office did not represent us, and that they forgot that they come from among us (the great unwashed, small minded ill informed masses). That’s OK, we’ll “Show Them” at the polls when Congressional Representatives are voted out of office throughout the State.