Mr. President, the Devil’s in the Details 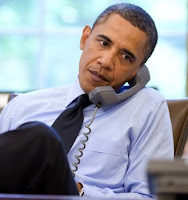 Lee’s Summit, September 6, 2010 – The Presidency of the United States of America requires the ability to deal with high stress and accuracy of details.  It seems  President Obama is having difficulty with both.

A ten day long vacation, followed by a mini-vacation in the span of less than 21 days, seems to point clearly to the fact that the stress is too much for the President, or that he does not put any value on being in Washington.

The details that got in the way back in July of 2009 with Henry Louis Gates Jr when President Obama he said “the Cambridge Police acted stupidly”.  The details in the case show that the police acted properly and when the situation was resolved no one was injured, except maybe personal pride, and the prestige of the United States Presidency getting involved in a local matter – well below the pay grade of a President.

Details got in the way again with the GP Oil spill when President Obama and his team waited for over 56 days to act, and when the actions were evaluated the details caused delays, various agencies had no idea how to work with each other, nor did they see the problems caused to one another by one another.

Again Details got in the way as the Administration apologized not once but now several times for “human rights” violations by Arizona.  Let’s get the fact straight: 1) There are laws on the books clearly stating the illegal immigration is a crime, 2) the law is a federal law, and 3) the federal government is not securing our borders:  Having constitutional laws that enforced, is not a human rights violation.

Even the Mexican President stated, with no remorse, that in Mexico if you are caught violating their immigration laws the perpetrator goes to jail.  Where is that different than what we are trying to do?  How does doing what every other country in the world does (i.e., protect its borders) make it a violation of Human Rights?  Details don’t back up the number of apologies.

Once again the Details get in the way with the Mosque.  Whether or not to build any edifice in a city is a matter for the zoning board and the city council.  Both have given permission to build the Mosque – as wrong as it may be in my opinion, the City of New York handled it within its own system, without the need for President Obama.  Yet the detail of where the problem should be handled escaped President Obama and his advisors.

I’ll grant you that the above details were murky and if handled improperly then lead to the situations that I’ve pointed out.  The next one, has no excuse and truly when combined with the above shows a complete lack of ability to deal with details; not just by our President, but by his entire administration.

UPI reported on September 6th that the newly remodeled White House has a saying that is attributed to Martin Luther King Junior, but in fact Reverend King always attributed the quote to Theodore Parker.  The quote is a meaningful one it states, “The arc of the moral universe is long, but it bends toward justice,” Once again the details got in the way.

It has to make you wonder, about this blunder and the potential for real issues that require a great ability to deal with details to chart the right course.  If the White House researchers did not know the origin of the quote, how are we sure that they know the details of how something more complex – like the economy – works?  How do we know that spending another $50 billion will actually help, rather than hinder, the moribund economy?

The Labor Department reported last week that unemployment was back up again to 9.6%.  How do we know that President Obama and his advisors will handle and interpret the details of our economy’s lethargic performance properly?

Mr. President, what if pumping $50bn in new government programs is exactly the opposite of what we should be doing?   If your team can’t handle the small details, how can we trust them to handle the important and complex details that actually affect the entire country, and by proxy the rest of the western world?