IOC Rejection of Chicago and the Butterfly Effect 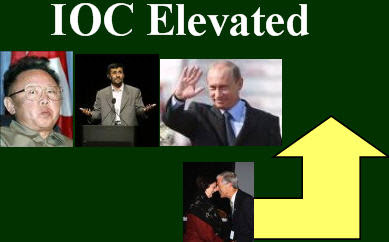 There is an old childhood rhyme that comes to mind as I read about the International Olympic Committee’s (IOC) decision:

In late September I read how President Obama was not going to go to Copenhagen to present Chicago’s case. In politics imagery is everything. The image of power is far more important than the power itself.

I remember the country during the Hostage Crisis and how impotent the United States seemed. I remember the blow we all received the day that President Carter sent the military to do the rescue and it was all botched up and we “failed”. The self image of the US was low at the time. It seemed the final blow to the events that were started by the Vietnam, the Watergate investigation, and all those things that chipped away at the prestige of both the United States and of the White House itself.

There is an axiom in the military that states, “Never give an order you know will not be carried out.” I think the same thing is true when it comes to international politics. Never put your power behind a cause you do not know for certain will turn out your way.

A President has to make sure that if he’s going to fight with Capitol Hill, that the pieces are in place so that he can either win, or find a reasonable way to take a different position at the right time. In International politics it is far more difficult, so the President has to set things up so that a “Yes” is a victory, and receiving a “No” shows that you set out a criteria so tough that the other side could not step up to the plate and accept what you wanted.

To use the power and the prestige of the President of the United States of America to put the IOC on an equal footing with England, Germany, France, Japan, Russia, China and the leaders of the 8 major economic powers of the world or the 20 most influential countries of the world, is ludicrous and bound to have them elevate their stature more by saying “NO” than by acquiescing to the request (read it perhaps as “strong arming”) of the President of the US of A.

There was far more to gain by the IOC saying NO, then they could ever have gained by saying Yes. And this small event (like the butterfly in Brazil that causes the Tornado in Kansas) will have negative effects on the Presidency of Barrack Obama and the United States as a whole. Not only do people like Ahmadinejad of Iran, Kim Jung Il of North Korean, and Russia’s Vladimir Putin test our resolve, but now also an insignificant, over pretentious Committee of the Olympics is set up to thumb their noses at the United States.

Don’t be shocked when I say this: President Obama had the right of it when on September 26th he said he would not go to Copenhagen. Whoever talked him out of that position, did a disservice to President Obama, to the White House and to the United States of America as a whole.

I am saddened by the avoidable defeat, and in a couple of years we’ll say the equivalent of “And all for the want of a nail”