It is for Christ’s sake, isn’t it? 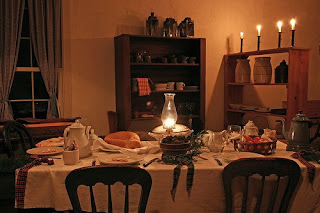 What a Christmas Holiday…

I was sitting there watching the morning news and I hear about the woman that worked for the large box store known as Lowes (but really, I bet you it could have been a number of others) where she wore the simple button that said, “it is called Christmas for Christ’s sake”. Well, that’s where she ran afoul of the Politically Correct culture running amok in the United States of America.

Now, let’s take a close look at the button. Is it the first part that is offensive? The first part states: it is called Christmas. I’m not sure. Let us evaluate the claims for holidays during the month of December

All these holidays, and I’m sure there are many more, have their own traditions within the group that celebrates them. So, I went to see the U.S. Office of Personnel Management, Operating Status and Schedules and I found the 2008 Federal Holidays per Federal law (5.U.S.C.6103) which establishes the following public holidays for Federal employees (click here for the actual website) and for Thursday, December 25, 2008 it lists only Christmas Day as a federal holiday.

WE THE PEOPLE of the United States of America recognize the right of everyone to celebrate as they see fit, and we not only support them but would likely fight to protect their right for their celebration. But, we must also be just as faithful to the holidays we have set aside. We celebrate, in order during the year: New Year’s Day, Birthday of Martin Luther King, Jr., Washington’s Birthday, Memorial Day, Labor Day, Columbus Day, Veterans Day, Thanksgiving Day and finally Christmas Day.

Why is it called Christmas day? Where does the word Christmas come from? According to the Merriam-Webster Online Dictionary it comes from the old English Cristes Maesse (literally meaning Christ’s mass) or a Mass in Christ’s memory, especially the birth of Christ.

It is not offensive to have a button that says, “It is called Christmas for Christ’s sake”. It is simply a reminder of the meaning of the season in a world that has forgotten that Christmas is not about the biggest commercial period of the year. It is not about whether Wal Mart, Lowes, Home Depot, Kohls, Macy’s, and ten thousand other retailers make money this year. It is about the celebration of love and peace. It is about family and friends. It is about sharing a meal and looking into the future with the hope and joy that only a family can bring.

To the woman who lost her job, my heart goes out to you; but you were right. It is called Christmas for Christ’s sake, and for yours and for mine, and for our families and friends.

God Bless and Merry Christmas to all, and to all. . . a good night!