Washington; What a Town…

Lee’s Summit, July 7, 2011 – I just arrived from a long day’s work (just after 11:00 PM) and read a story that truly made me wonder why I don’t blog more often.  The issues that set me to the task of running a blog are still as true today after almost 3 years of doing this, as they were in the run up to the 2008 election: fiscally this country has a disconnect.  Washington wants liberal (meaning freewheeling) spending, while Main Street wants Washington to be Fiscally Conservative.

In 2010, Mr. Boehner we elected literally hundreds of republicans to office with one single and very loud message; get Washington’s spending under control.  Republicans promised us to fight Obamacare (you’re not doing so well there), to reduce the 2011 budget by $100 billion (you didn’t do so well there either), and to bring conservative spending habits back into Washington: Mr. Boehner, are you caving in there now too? 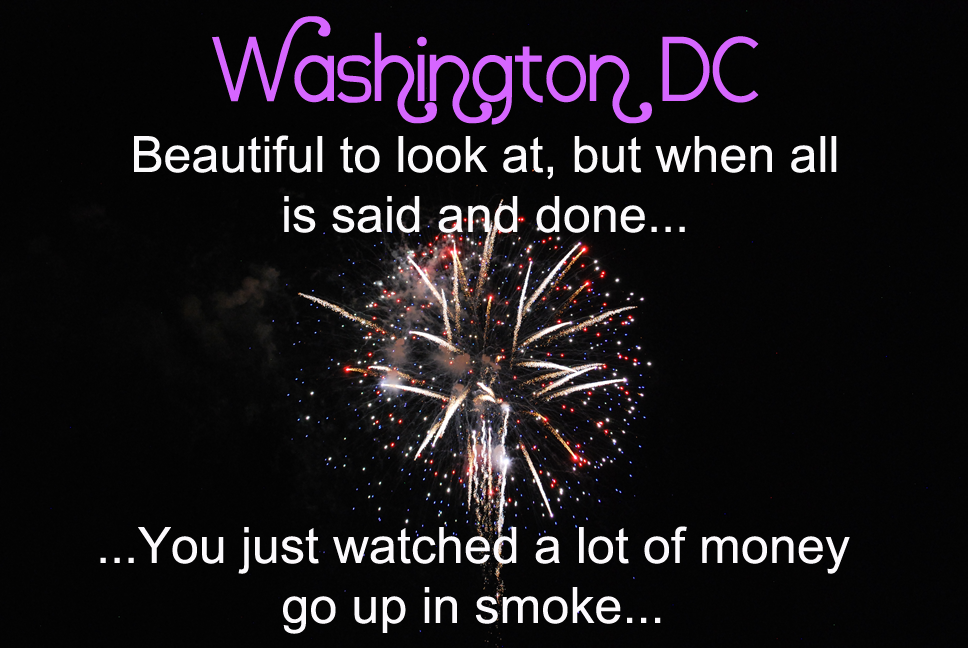 I used to live in Van Wert, Ohio Mr. Speaker, and I know farmers are a very conservative lot.  They know that with a single rain at the wrong time, they can literally lose thousands of dollars.  They spend money when they “have to” not when the “want to” because the land is an unforgiving taskmaster.  I would have thought, Sir, that with Ohio as your home State, you’d understand the reasons why so much of Ohio is truly fiscally conservative.

I now live here in Missouri, and I see the same kind of people here in Lee’s Summit: hard working Americans that love to have fun, but only spend when they have to, not just when they want to.

Something must happen to Congressmen when they leave their home states and move to Washington and start to pass laws, and decide how to spend money, and how much to tax people.

NEWSMAX is running a story tonight that Republicans in the Senate have agreed to “Revenue Increases” a Washington euphemism for increase in taxes:

“If you add up all of the revenues that we Republicans have agreed to, it’s between $150 billion and $200 billion,” said Senator Jon Kyl, the No. 2 Republican in the Senate.

Republicans, amongst themselves have agreed to “more revenue” that is a tax increase – and yes, I know I repeated myself, but this is just incredible if true.

The house Majority Leader – Eric Cantor – weighed in on the same topic and is quoted in NEWSMAX as saying:

“Any discussion about loopholes must be accompanied by offsetting tax cuts,” Cantor said at a news conference.

The problem is that we cannot tax ourselves out of this situation.  Tax increases are not the answer.

Let me put it this way.  If you took the combined wealth of the top 400 wealthiest Americans – those that we apparently envy so much that we want to redistribute their wealth (I guess we must think that they obtained it by less than honest means) – we only come up to a measly one point four (1.4) Trillion Dollars (see the FORBES list).

Keep in mind that the list starts with Bill Gates at $54 Billion, and ends with Tamara Gustavson at a paltry one billion ($1 B) dollars.  I’m certain that if you’re considering someone who makes a million dollars a year as evil and worthy of stripping their wealth, you must be a thousand times more willing to take Tamara Gustavson’s money from her.

So we strip the wealth of the entire top 400 wealthiest Americans.  We leave them with a zero (0) balance in their account; and put it to paying down the debt.  How big of a dent do you think it will make?

Their combined wealth if fully redistributed to pay the debt only covers a bit less than 10% of the debt:  Then what?  Who do we go after then?

In fact, if the Wall Street Journal is correct, the 1.4 Trillion we’d obfuscate from the top 400 wealthiest won’t even cover the 2012 budget deficit.  The deficit is projected to be 1.48 trillion (see article here).

So tell me, is “Revenue Increase” the answer to our fiscal irresponsibility?  Even when or if, or is it when actually, we strip the wealth of 400 Americans with Personal Worth of over 1 billion each, we only get rid of one year’s deficit, and not cut into the debt one cent.

We could sell the family jewels, but if we don’t quit spending, we’re going to be broke, very quickly and have nothing left to hock.

Speaker Boehner, Majority Leader Cantor, and the rest of the Republican’s in office thanks to the fiscal conservative nature of the 2010 mid-term election: have you forgotten why we sent you to Washington?  So soon?

Washington must be one hell of a town to be able to do that to you.  But, keep in mind, Main Street from Hoboken to Santa Ana, from El Paso to Minneapolis and every small city and town in the country has not forgotten.

We sent you to Washington to stop the spending – real spending, not the funny math of the 2011 budget compromise.