Creator versus Consumer of Wealth 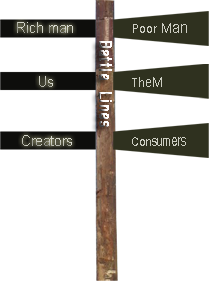 Philadelphia, June 30, 2011– Today my day started in Lee’s Summit at 3:15AM headed for a 6:15 flight out of MCI through Detroit to Philadelphia.  The reason for the trip was strictly business; but I was surprised about what I learned about a small company that at one point was purchased by a much larger conglomerate: they, like the small company I work for are dedicated to the creation of jobs and the personal wealth it brings.

This company makes a unique niche market product; something no one else in the world makes.  We did not know of this company a month ago, but when a critical process needed to be improved and our team went searching they found them.  The company understood the immediacy of our need and provided support, adjusted schedules, and literally made what seemed only a few weeks ago to be impossible, not only a possibility but a reality.

Well, because they have this unique technology that we can use, our products are better and will reach professionals to make their jobs better.  They in turn will generate more revenue (some would call it wealth) and have the opportunity to either keep people employed or hire more folks.  Our customers buying from us will also help us to either keep people employed or make enough of a difference that we may hire additional people:  All in the process of creating wealth for our ownership, for our suppliers, and if done properly for our customers and theirs as well.

Creation of wealth is not evil.  It does not mean that our owners, suppliers, and customers are out to destroy the world.  It simply means that if you have an idea, and you work hard to make it into a business you “may” reap the economic rewards.  You are not ensured to obtain it, you are simply in a position to do so.  Many small firms don’t last; but if their ideas were good, then others will step in with more good old “know how” plus a fair amount of blood, sweat and tears, and make a difference by generating business both upstream (suppliers) and downstream (customers).

In President Obama’s press conference he set his sites on the challenges our government faces with the debt crisis.  He was right when he said that “…congress is spending too much…” but the sad thing is that he [the leader of the Free World] was passing the buck.  Those who compared him to Truman missed the point.  Truman knew where the “buck stopped”.  Truman understood that as President you are the one who is responsible and the one who has to make tough decisions and LEAD.

I think of it this way.  This week AT&T had an outage that caused our communication lines to break down.  It is the end of the month, the end of the quarter and the end of the first half of the year.  We could have just called our customers and told them the super hot order they had placed was not going to go out [imagine this conversation]:

Mr. Customer, we can’t ship that part your customer needs to fix Mrs Smith’s car like they promised.

Well, Mr. Customer see, AT&T lost power on our substation and we can’t communicate with UPS nor our computer system.  So you see, it’s their fault not ours.

What do you think our customers would say?  Would it be “oh, those terrible people at AT&T!” or maybe Mrs Smith who’s car won’t be fixed “Oh, dang my luck…. It’s ok though – it’s not your fault”

Ah, a nice dream but the reality is that no one cares that AT&T had a substation go out. They simply care that the parts they ordered arrive on time.

We did not blame AT&T (thought obviously we were not very happy) we simply understood that the day was going to be difficult, and people would have to use Cell Phones, and faxes, and printed PDF’s to get the orders to the floor, picked, packed and shipped.

President Obama blaming congress is like me blaming AT&T and thinking I’m going to get a “pass” from our customers.  We both know better than that.

Leaders have to LEAD.  It does not matter if we are right, wrong, popular or unpopular.  Leadership is difficult; and it should be.  Leadership has its perquisites and its price.

The debt situation was not created overnight.  It has taken dozens of years, and many congresses to get it to this point.  It is unpleasant to have to cut the budget.  It is unpleasant to have to cut our favorite program.  No one likes the job ahead.  And no one asked Senator Obama to run for election; he chose to do it all on his own.  He wanted to be the Leader of the Free World.  Now is not the time to be passing the buck to Congress: past, present or future.

Now, President Obama, is the time to lead!

Do not take the American voter for idiots who won’t see what you are trying to do by passing the buck to Congress, blaming CEO’s for the uncertainty in our economy that freezes them out of hiring people, blaming the private jet industry, and blaming Bush for all your problems.

American’s believed you when you said you’d bring “hope and change” to Washington.  Now is time to stand up, tighten the belt, and get the debt under control.  The United States of America is not [under taxed] it is [over spent].  Greece looms large in our horizon; don’t let that happen to us.  The Greek Parliament understands that cutting costs is their only solution; they know they are over taxed and still over spent.