Global Warming, Cap and Trade; what a boondoggle 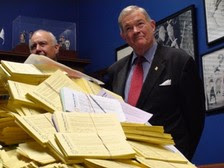 Among all the urgency, hype and congressional ramrodding around Health Care the waste of money and political goodwill on fact-less, science-less (consensus is NOT the scientific approach that guided the technological boom of the 19th and 20th century), driven by the almost religious fervor of those who seek to blame global warming solely on human activity, the global warming boondoggle continues.

Boondoggle, have you ever looked at the definition?  Let me help you.  According the the Merriam-Webster OnLine dictionary it is defined as:

1 : a braided cord worn by Boy Scouts as a neckerchief slide, hatband, or ornament
2 : a wasteful or impractical project or activity often involving graft

I found it interesting that an American Scout master in 1929 coined the term.  When I was in the Explorers (part of the boy scouts) we made boondoggles to keep busy on rainy days when we could not go out.  It is a good way to kill a day, use up energy, and accomplish nothing of true value.

Two things happened today to get me on this topic:  NPR News and a letter from Senator Kit Bond, Republican Senator from Missouri.

The crux of the issue is that there is no true science behind global warming.  I take my hat off (if I had one) to Beijing on calling a Boondoggle a Boondoggle when they see it, and then wrapping nicely around the communist ideal of spreading the wealth.

China is now the world’s biggest emitter of greenhouse gasses, according to the International Energy Agency. But China likes to point out that its cumulative emissions are a quarter of America’s.

“The existing situation is not made by China,” said Huang Renwei of the Shanghai Academy of Social Sciences. “It’s 100 years ago. So developed countries should share more responsibilities than China. The U.S. shouldn’t make excuse and say China has more responsibility than U.S.”

That’s why China wants the U.S. to make much larger emission cuts than those pledged. Beijing also wants developed countries to contribute a portion of their GDP — between .05 and 1 percent — to developing countries to help adapt to global warming. And it’s keen for more technology transfers.

Translation:
1) We (China) did not cause it.
2) We (China) do not believe it is caused by humans.
3) We (China) see it as a way to get funding from those who saw the value of the industrial revolution and improved the economy of the world.  They should share their wealth with us, because we started later and it is not fair.

I am surprised to hear President Obama’s envoy, Todd Stern not seeing the benevolence being asked by China from the rest of the vastly richer nations of the modern economies.  Those economies should take a larger hit, pay for all the improvements, and allow China to grow into the super power economically and militarily; that way it will balance with the United State’s mean spirited financial and military supremacy.

The NPR story states: Zhou Fenqi from Shanghai Academy of Social Sciences echoes China’s line that emission caps would damage its development: “We could not limit the amount of food for a child, because a child needs to grow, he needs it more than an adult. We cannot do caps.”

Bravo!  Bravo!  Well said.  Now, if the Chinese understand that there is a time and a place for things to be done, why are we so stubborn to ignore the reality.  We ARE in a recession, we ARE in a global financial malaise and we must not take out USD 3.6 Trillion (let me write it for you $ 3,600,000,000,000).  That is real money folks.  That is money that companies could put towards new efficiency, towards new more customer friendly products, towards new jobs.

Taking 3.6 Trillion dollars out of the economy is a devastating blow to the economy when it can least handle it.

Kit Bond in the letter to his constituents pointed out that he is listening to the piles of mail he is getting from Missouri:

The detrimental effects of cap-and-trade are understood not only on Capitol Hill, but also back home in Missouri. This month, Senator Bond was presented with thousands of correspondence signed by Missouri constituents against cap-and-trade legislation. Members of the Association of Missouri Electric Cooperatives (AMEC) presented the Senator with 50,000 postcards signed by cooperative consumer-members and the Missouri Farm Bureau (MFB) brought with them more than 3,400 letters from Missouri farmers and ranchers all of whom oppose the cap-and-trade legislation.
Barry Hart, Executive Vice President and CEO of the AMEC said, “We want to make sure our members’ voices are heard. These thousands of cards are tangible evidence that cooperative consumers are paying attention and have real concerns about this legislation.”
Charlie Kruse, President of the MFB said, “Our members are knowledgeable about this cap-and-trade legislation and they are very concerned. We appreciate all of Senator Bond’s hard work on this issue. If the goal of Congress is to transfer money from the pockets of American families to the federal coffers then the bill that the House has passed is a good one.”

Just like a magician, we are watching the one hand, while congress has done major damage to the economy with the other.  We need action and we need people to get involved.  We need to let our Senators and our Congressman know that we’re not happy with the way the country is headed.

As an infamous senator once said (updated to today’s reality) a trillion here, and a trillion there, and pretty soon you’re talking about serious money.

Call your Congressman and Senators, let them know how you feel.