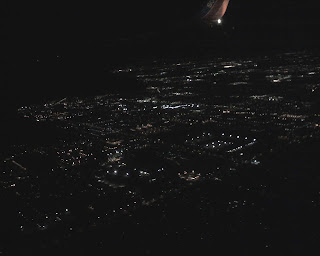 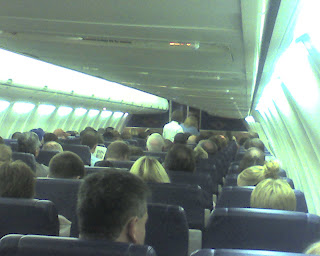 On Thursday night December 11, 2008 on Southwest flight 416 between Kansas City and Dallas Love Field, [picture 1 is the final approach into Love Field] I witnessed heroism in mid air by a well trained flight crew and good Samaritans. In this era where people don’t get involved and all we hear on television is how man is unkind to fellow man, I was privileged to be on this flight where people cared of each other. I was on a flight where people did not jump up out of their seats the minute the plane was parked at the gate. I was part of something special. Look at picture 2, almost 5 minutes after we were parked at the gate, no one is out of their seats, allowing the flight crew to get the ill passenger out first.

One flight attendant facing backwards from approximately the second row. Various passengers assisting with something from the overhead.

The group around the medical emergency seems very calm and the flight attendant has the situation managed.

6:54PM; Another flight attendant in the galley area on the phone, likely with the pilot detailing what needs to be done upon arrival at Love Field.

6:57PM; looks like we’re over OK City and turned further to the south.

People are still around whomever needed help and several trips in and out of the lavatory and retuning to the area where the flight attendant continues to keep everyone calm.

There is someone new in front of the starboard aisle seat looking astern. She has a look of concern clearly visible from Row 19 where I’m sitting.

7:02PM; the first med assistant from row 13 or 14 Port side window walks back to her seat. She does not seem very concerned at this point, but by her age I’d say it would take a grate deal to shock her.

7:04PM; only 3 people remain up front but it still includes the flight attendant.

Concern for the well being of the passenger is clearly visible in the flight crews actions towards the ill passenger.

7:11PM; The male flight attendant straps something around his neck and kneels down near the ill passenger.

Obviously all service was stopped. The main flight attendant working with the passenger walks astern to view the reaction of the rest of the passengers and to return anything related to the stopped service.

Her earlier jovial mood is gone. The traditional Southwest Airlines fun on board was quickly and correctly replaced by the professionalism of a well trained crew providing aid to a distressed passenger at 33,000 Feet.

7:19PM; Captain makes the announcement that there was a medical emergency and that we’d be pulling into Gate 7 where a med team was waiting to assist and that all passengers were to sit and wait while the flight crew assisted the passenger deplane.

7:35PM; Love Field; Flight crew quickly moves to their positions to prepare to deplane the ill passenger. The captain opens the door and the passenger is taken out.

The rest of the passengers begin to stand up and move about the cabin in the normal routine. The impression I have of the entire sequence of events is that of a great professional display by the crew kept everyone calm. I take my hat off to the crew of SW416 from Kansas City to Love Field.

Good luck to them and God Bless the good Samaritans of the medical profession and the great coordinated work of the flight crew.