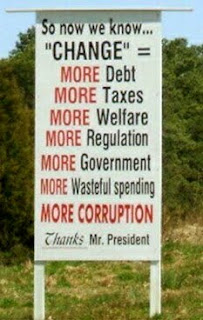 Lee’s Summit, May 31, 2010 – I received the picture from someone who asked me what I thought.  I read the contents and thought there isn’t much to add.

Look at the sign and tell me in all honesty of anything on it is untrue.

Change – More Taxes.  Yes we have more taxes.  The bush Tax Cuts are being changed, the new Health Care law will raise taxes, Capital gains will be going up.

Change – More Welfare.  There is good welfare and bad welfare.   If you cannot work because of a true impairment then you should get a hand up till you can help yourself.  Then there is bad welfare, that’s the kind where you are very capable of working but chose not to.  The Health Care program comes very much across as a welfare program that is poorly designed at the cost of doing damage to those who truly need help.  We have more welfare and it’s the wrong kind.

Change – More Regulations.  Even in the small community of Lee’s Summit there are way too many regulations, ordinances and invasions into the private side than should be necessary.  Washington makes Lee’s Summit look like rank amateurs.  Recently I did a piece on our Federal Representative, Emanuel Cleaver.  In 5 years he sought to pass 62 pieces of legislation, only succeeding in one passing and being enacted.  There are more than 400 representatives in congress, if each is trying to pass one a month that means that there are 400 plus resolutions for more regulations coming each month.  Yes, we have too many regulations, and more are coming our way.

Change – More Government.  I’m only going to cite one example but there are many more; 13,000 new IRS workers to check up on our health insurance.

Change – More Corruption.  The other slogan that President Obama ran under was “The most transparent administration in history; no more business as usual.”  Well, part of it was right; the way business in Washington is done has certainly changed.  The push for vote buying are much more expensive, the offering of key jobs if you lose your seat has increased and the efforts by the White House to return to the days of Richard Nixon’s style of Transparency seems to be in full effect.  Nixon’s transparency, however, would not be the style I’d recommend.

Representative Emanuel Cleaver has done a great job of spending our money, it is time he come home and spend some of his own.  In his place we need a proven conservative who knows that the money they spend is our hard earned money.

Jacob Turk seems to be the person we need:  Someone who understands the simple basics of the economy.  Let business create jobs, let business keep their fair share of their hard earned profits to re-invest in the company and generate more jobs.

In Missouri’s Senate, we need a proven fiscal conservative that is pro jobs and knows how to cut costs at home first.  We need people that are going to be pro-jobs growth and let us do the things that we do best: Work Hard, Earn a fair pay, and fight for our “opportunity” at happiness.

Will Kraus is the man that has been the representative for our district and one I have followed closely.  He is not a fair weather politician.  He knows the cost of not creating jobs and taking unfunded laws from the federal government.  He has proven that he can cut budgets and focus on the economy.