Washington Meddling too Much into Private Business 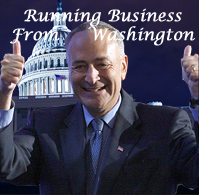 Lee’s Summit, July 17, 2010 – I can now breath a great sigh of relief, Chuck Schumer (D-NY) has addressed the looming crisis of the iPhone 4.  I am truly far more relaxed than ever to know that our elected officials wasted no time to reach consensus and write an open letter to Apple and show them how to fix the problem with the iPhone.

Nick Saint wrote a great piece on the Business Insider about the quick action taken by Chuck Schumer on this phone system disaster.

OK, all joking sarcasm aside this is an indication of what some of our elected officials are thinking about and are trying to do to help the country.  As President Obama is fond of saying “this is the worst economic crisis (inherited from Bush) since the Great Depression.”  I can agree on a couple of parts of that statement: 1) It is a serious economic crisis, and 2) he did inherit it.

Now, wouldn’t you think that if this is the worst economy since the great depression, that congress and the senate have a responsibility to figure out how to promote job growth?

Wouldn’t you think that the laser focus from the State of the Union would have some hard concrete positive action?

Wouldn’t you think that with all the brains in Washington someone would have come up with a way to encourage businesses to grow?

Instead what is Washington doing?  They spend months getting in the way of the Gulf region’s governors and state government and made a bad situation worse.  The clean up, while 100% BP’s responsibility, will have to be endured by the Gulf States.  Payments from BP to cover damages will help ease the monetary hardships, but it won’t bring back their businesses.  Only the people of the region with their hard work and risk taking will manage to do that, if they can.

Washington, to make things worse, imposed a moratorium on drilling.  This can cost thousands of jobs when our unemployment rate is hovering just under ten percent.  When a judge ruled it was not going to allow the moratorium, Washington spent its brain trust to come up with a new moratorium to halt drilling.  Set fully in its ways, Washington will do its level best to impose its will on the local governments, the local constituents, and the rank and file hard working men and women that depend on the oil drilling for a living.

Now Washington, having had a taste of telling big business what to do (BP, Financial Institutions, General Motors, etc.) is enjoying this new power (a power specifically not written into the United Stats Constitution) feels comfortable taking on Apple.  Chuck Schumer, with his vast knowledge of marketing, public relations, and corporate strategy is going to tell Apple what they need to do.

Honestly: Are you kidding me?

Apple, of all companies, understands the value of market perception.  They know what it is to build great technical products that don’t do a thing for the market.  Remember the Newton?

Apple has had its share of product development fiascos, but they’ve been on a roll since the introduction of the iPod.  Jobs knows, as does the rest of Apple’s management that they need to jump on this quickly if they are going to avoid a backlash next time they introduce the next generation anything.  Consumers have a long memory.  They tend to be skittish about buying a product from a company that burned them last time.  This, in business, is common knowledge.  Stephen Jobs is not going to jeopardize the company’s franchise simply for a quarter’s profit in a down economy.

Chuck Schumer may be a great politician, but he’s no businessman.

Message to Washington:  Leave business to business people and consumers who vote daily with their wallets.